You are here: Home1 / Three points to start the new year

Wellington entertained Hallen on Saturday, 5th January, and picked up their seventh win of the campaign, avenging a 2-1 defeat away earlier in the season.

The pitch had dried out considerably and the ball spent quite a lot of time bouncing or in the air and was scrappy throughout with very few moments of quality. The conditions suited the much bigger and taller visitors but they failed to construct many worthwhile chances from open play, only proving a threat when they were able to dominate from set pieces.

Wellington were the ones able to create opportunities and, in the end, ran out worthy winners. They took the lead when Glen Wright, who again worked tirelessly throughout, burst into the box only to be brought down and Jack Bryant stepped up to blast the ball into the corner of the net, giving goalkeeper Aaron Avery no chance. 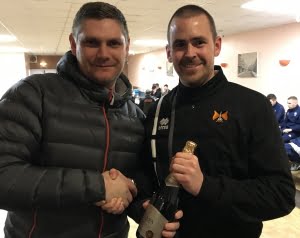 d and tried to block his shot. Conor Bryant, who had another outstanding game up front, twice came close to putting the game beyond Hallen’s reach with an overhead kick after some good play by Josh Wadham and Chamberlain and again when Chamberlain nodded the ball on and he only narrowly missed the far post with a snap shot.

Hallen came into the game shortly before the break when Daryl Charman headed two corners over the top from good positions and then set up Caelen Simpson whose shot was deflected wide of the mark.

Scott Townsend replaced George Rogers at the interval and Tom Hawkings replaced Mitch Woodgate 11 minutes later before Aaron Anglin cut in from the flank for the visitors and fed Charman who squandered perhaps their best chance to reduce the arrears when he somehow shot over the bar from in front of goal.

Wellington weathered the spell of pressure and then created chances with Wadham producing an excellent save from Avery, who pushed a goal-bound shot around the upright, and shortly after denied the same player when he blocked a shot from close quarters.

A Wright shot fizzed over the top before Paulo Borges, who had replaced Chamberlain, had a shot blocked and Hallen scrambled the loose ball clear. Hawkings came close with a header and Conor Bryant saw a shot rebound off the crossbar but Borges finally put the game to bed when he pounced on an error and Avery failed to hold his shot from the edge of the box and could only watch as the ball bounced into the corner.

Scott Thomas headed yet another corner over the bar as Hallen looked for a consolation goal.

Not the greatest of games but it moved Wellington back up to 13th place in the table with solid performances from Tim Legg, Scott Drayton and Jack Bown-Porter helping to secure their fifth clean sheet of the season.

Drayton was named man-of-the-match by the Doidge family and the award was presented by Jason Hawkings.