You are here: Home1 / Promotion-chasing A team hit eight

With their scheduled game rained off, our A team worked quickly to arrange a “home” fixture against Hamilton on the 3G pitch at Bridgwater Academy. 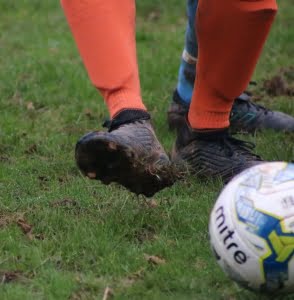 Welly started the game strong and had plenty of chances to score and the first-half goals came fast with player-manager Luke O’Hara opening the scoring.

Matt Holmes then hit a double, the second being a first-time 30 yard pot shot into the top corner, and then Ash Bright also scored to make the score 4-0 at half-time.

Disaster then struck as the floodlights wouldn’t turn on and  the game was close to being abandoned. But, just as everyone was ready to call it a day, the lights came on – much to the delight of the Wellington players looking to add to their impressive goal difference.

The second half was much the same story with Welly attacking fast and hard, adding four more goals with O’Hara completing his hat trick before being subbed off as soon as his third hit the net.

Jordan Sellick then calmly chipped over the goalkeeper, all to be topped off with Jordan Mace rounding the keeper and placing into the side of the net to make it 8-0.

Another clean sheet for Jared Holder in the Welly goal as the A team fight for the promotion places … tough game to come this weekend but the boys are up for it!

First team at the double in Bristol
Scroll to top