Another double completed by first team

You are here: Home1 / Another double completed by first team

Wellington travelled to Gloucestershire to play bottom club Shortwood United and completed their second double in eight days with a narrow victory.

The pitched, tucked away on a hillside on the edge of Nailsworth, provided a testing surface and produced few moments of any great quality.

Josh Wadham and Lewis Tasker were unavailable and George Rogers was forced to withdraw shortly before the kick-off but manager Clive Jones was able to bring both Sam Bryant and Scott Drayton back into the starting line-up.

The game was only two minutes old when a Jack Bown-Porter throw-in found Joe Chamberlain on the edge of the box and he turned smartly and sent a curling low shot that evaded home team keeper Adam Clark who appeared, initially, to be unsighted.

Shortwood’s young team, marshalled by impressive central defender Tom Hoskins, recovered from the setback and keeper Josh Mclean had to be on hand to block a snapshot from Taylor Marsh as play swung from end-to-end. 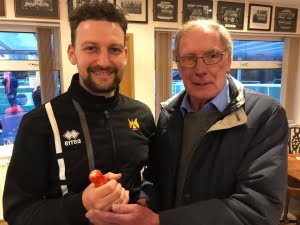 Wellington had a chance to increase their lead after 25 minutes when a good move down the left flank saw Bown-Porter get in behind the defence and lay the ball back to Conor Bryant but his side-footed shot was saved by Clark.

Just after the interval Hoskins came up for a corner and his goalbound header was denied by a good save at the far post by Mclean who managed to scramble the ball away to safety.

The Shortwood youngsters, playing at great pace, saw plenty of possession with the diminutive Brooks Lee looking particularly busy but they were unable to create many opportunities as Wellington’s defence held firm.

Wellington also found it difficult to create any worthwhile chances with both Jack Bryant and Chamberlain, who were carrying injuries, being replaced by Aaran Hawkings and Lewis Pocock.
Glen Wright came closest to adding to Welly’s tally with a header at the far post from a Bown-Porter cross which found the side netting.

They were pleased to hear the final whistle and secure the points from a far from easy game against opponents who have improved greatly since the beginning of the season and will surely get that long-awaited win before long.

Three wins on the bounce for rampant Reserves