You are here: Home1 / Back-to-back home defeats for firsts

Wellington suffered a second successive home defeat to a side below them in the table as they went down to Cadbury Heath at the Playing Field.
Their mid-table position is looking precarious with two blank Saturdays now giving the teams around them the chance to play catch-up although the break will hopefully allow them to recharge their batteries ahead of a challenging run-in.
With manager Clive Jones in the Caribbean watching England’s cricketers in action, assistant boss Ben Welch took charge of the side and made three changes from the team beaten by Brislington the previous week.
Keeper Josh Mclean, defender Jack Bown-Porter and wide-man Joe Chamberlain all returned from injury to replace Mitch Woodgate, Sam Bryant and Tom Hawkings, who has been ruled out of action for a year following a foot operation.
The opening exchanges were quite even with Josh Wadham forcing Heath keeper Matt Semple into a full-stretch save and captain Glen Wright seeing a shot cleared off the line.
At the other end, there was a sign of things to come midway through the half as a cross from the left found striker Sacha Tong completely unmarked but his header was brilliantly pushed up and on to the top of the bar by Mclean. 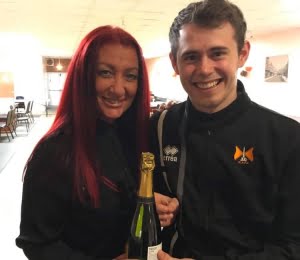 The deadlock was broken after 29 minutes from another cross – this time defender Tim Legg could only head the ball out as far as Tong, who drove it low past Mclean.
That fired up Heath and they doubled their lead five minutes before the break when a surging run from skipper Simon McElroy ended with his low cross being clinically turned home by Tong.
Wellington suffered a blow with Chamberlain forced out of the action by injury at the interval, the versatile Woodgate – who had played in goal the previous week – coming on as a replacement to support Conor Bryant up front.
Tong was inches away from his hat-trick shortly after the re-start as he just failed to connect with another dangerous cross while Welch sent on his other two subs, George Rogers and Joe Wylie, as Wellington tried to get back in the match.
The home side were offered a lifeline with 13 minutes remaining as a ball into the visiting area bounced up and struck the hand of defender Toby Rennie. Wadham coolly dispatched the resulting penalty and it was game on.
Wellington pressed for an equaliser but the closest they came was a looping header from man-of-the-match Wright, who was again denied by a goalline clearance.
It was another disappointing result but a definite bright spot for the home side was provided by Wylie’s brief appearance – the youngster, who made his debut the previous week, certainly looks like one to watch for the future.

A team keep their cool to clinch the points

A team beaten on penalties in semis
Scroll to top