A team are back to winning ways

You are here: Home1 / A team are back to winning ways

Welly A lost the toss and had to defend against the treacherous conditions with the wind blowing straight down the throats of the boys. But Welly battled hard and, for the first 15 minutes, it looked like it would be backs to the wall until Welly broke with some slick passing on the floor seeing Tenny Harlow get clattered by the keeper and Liam Thorne on hand to slot the ball home. 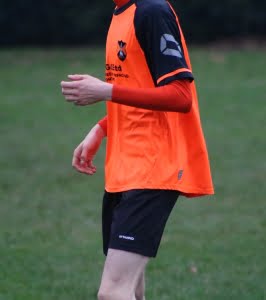 Welly continued to defend well and another good passing move saw Oli Ghazala cross for Jordan Sellick to make it 2-0. Morganians carried on pumping balls forward and eventually got their reward, keeper Jared Holder pulling off a good save but the ball falling to their striker to pull a goal back. Welly weren’t finoshed though as Ghazala managed to restore the two-goal cushion back with a first time finish from a through ball from Brad Holmans.

The second half didn’t start to well for Welly as the Morganians striker, who started on the bench, managed to wiggle through the defence to drag them back in the game with his second goal. From then on it was all Welly, creating a few half chances but only one which Jordan Sellick managed to score to put Welly 4-2 up. Welly continued to stay in control with Holder only getting the ball one more time in the second half.

It was always going to be a difficult game in terrible conditions but three points are three points and we move on to Wednesday night when we host Galmington Reserves on the main Playing Field pitch, ko 8pm followed by a home game at the Rec on Saturday v Castlemoat Reserves.

Memorable day at Exeter for under 10s