Wellington travelled to play Street and came away empty-handed after looking odds-on to pick up their first point of the season. 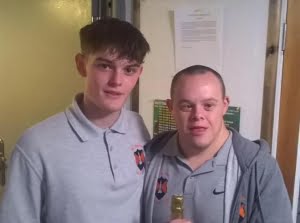 Street had much the better of the first half with Leighton Thomas causing problems down the left flank and Wellington were frequently under pressure. They did, however, come close on two occasions – Joe Wylie cutting in from the right and putting the ball across the face of the Street goal before Joe Wilkinson was sent clear and bore down on goal only for keeper Liam Norris to come off his line and block his shot.

Two mistakes at the back almost let Street centre-forward Kyle Strange in but a timely tackle from Sam Bryant saved the day. Street almost took the lead when Josh Mclean parried a shot only for the ball to go straight to Strange but the ball rebounded off him and went just past the upright.

The pressure increased on the visitors’ defence just before the break with a series of corners from which Dan Linham hooked the ball wide from a good position. Wellington lost the ball in midfield and Kam Andrews was left in on goal but hit the upright. However, Wellington failed to clear and Strange was on hand to give Street the lead shortly before the break.

Street continued on the offensive in the second-half but Wellington were about to enjoy their best spell. Wilkinson won a challenge and the loose ball was picked up by Wylie but he was wide of the target.

Joe Chamberlain replaced Jack Bryant and a cross to the far post was headed across goal but there was no support. Harry Gardner broke quickly down the right and crossed to Thomas who hit the angle with a rasping shot but Wellington hit back and equalised when Chamberlain crossed to Tim Legg who in turn fed Glen Wright just outside the box and his superb shot flew into the corner of the net on the hour.

Shortly after Wylie turned cleverly and fed Chamberlain who twisted past two defenders but then shot wildly and missed the target. Welly were beginning to take some control and a few minutes later Wylie turned the game on its head when he latched on to a chip over the top and cleverly lobbed the keeper to give the visitors the lead with 20 minutes remaining.

Street hit back and equalised just minutes later after Wellington again possession and Thomas had time to turn and beat Mclean from just inside the box.

Wellington then lost the influential Wylie who was replaced by Paulo Borges and Mclean was forced to bring off two magnificent saves to keep Welly in the game. But, and with only minutes left, they lost possession pushing forward and Andrews was on the end as Street broke away to give them the lead.

There was still time for the home side to break again and this time Strange was left with an easy chance and made no mistake.

PHOTO: Wylie receives the man of the match award from Daniel Aspin.