You are here: Home1 / Early goals lead to defeat

A disastrous start to the game left Wellington with too much to do as they failed to open their points account for the season in Bath. 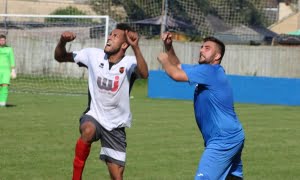 They conceded two goals in the opening eight minutes and, although they looked more dangerous throughout the rest of the game, were unable to do enough to halt their disappointing August.

Ironically, it was Wellington who nearly took the lead after three minutes when striker Carl Jones robbed a defender and raced clear on goal. He rounded the home keeper but his final shot lacked power and was comfortably dealt with by a covering opponent.

Almost immediately, Odd Down went upfield and took the lead. A cross from the left reached diminutive winger Jay Murray at the far post and his header looped up and over keeper Josh Mclean.

It got worse from Wellington four minutes later as the home side extended their led with a huge slice of luck, Josh Cann’s speculative cross from the left sailing over Mclean and into the net.

Wellington got back into the game from a penalty on the half-hour as Ian Bellinger played in Carl Jones, who was felled as he rounded the keeper with Jack Bryant clinically dispatching the spot kick.

And they were so unlucky not to go into the break on level terms when a spectacular volley by Carl Jones smacked against the inside of the post and out again.

Wellington took the game to Odd Down in the second half without being able to draw level and the home side made the game safe from their only serious effort on goal after the break with 19 minutes remaining. The ball was played forward to James o’Kell and he gave Mclean no chance with a fierce rising drive from 20 yards out.

Reserves start season with a draw
Scroll to top