First team knocked out of Vase

You are here: Home1 / First team knocked out of Vase

Two goals in each half saw Wellington knocked out of the Vase away to in-form Shepton Mallet.

With keeper Josh Mclean and talented youngster Joe Wylie both unavailable, manager Clive Jones brought in Mitch Woodgate in goal and also welcomed back striker Conor Bryant, who has re-joined the club after a short spell with Buckland Athletic. 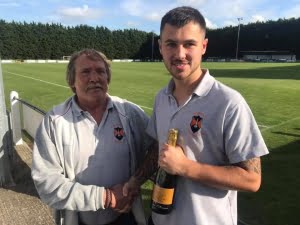 Shepton, who have made an impressive start to the season and have yet to be beaten, gave the visitors an early warning when they just failed to convert a dangerous cross after only two minutes.

They then went ahead seven minutes later as Aaron Seviour was sent racing clear with only Woodgate to beat. The keeper did well to block his shot but the ball unfortunately went straight back to Joe Morgan, who made no mistake.

Playing down the Shepton slope, Wellington mounted a series of attacks and their best opening fell to Joe Chamberlain, who fired over at the far post.

Central defender Carl Jones also had a header well saved but they suffered a blow after 24 minutes when Jack Bryant went off with a bad back and was replaced by young Lewis Pocock.

Shepton then doubled their advantage against the run of play on the half-hour. The ball was played in from the right and Jack Fillingham was left with too much room to sweep a low shot past the diving Woodgate.

Wellington needed to re-group for the second half but they fell further behind six minutes after the turnaround. Carl Jones brought down Fillingham in the box and the striker picked himself up to fire home the penalty.

The visitors found themselves exposed by Shepton and were indebted to Woodgate for a succession of excellent saves and Sam Jones for a goalline clearance.

But the keeper could do nothing about Shepton’s fourth with 16 minutes remaining as the ball was flicked through for sub Tyler Davis to run clear and seal the tie.

PHOTO: Woodgate was named man-of-the-match and received the award from treasurer Reg Oxby.

Reserves start season with a draw