You are here: Home1 / Five-goal response to cup defeat

Wellington bounced back from their heavy midweek cup defeat with a morale-boosting victory over Odd Down at the Playing Field. 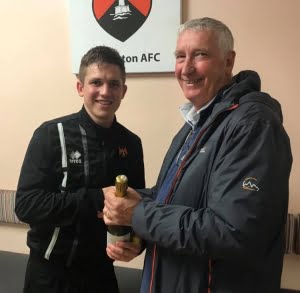 Manager Clive Jones was able to field his strongest line-up for several weeks, with the return of a number of key players, and the result was a much-improved all-round performance.

There wasn’t much to choose between the sides in an entertaining first half although Wellington went into the break in front thanks to a moment of pure quality after 14 minutes.

Central defender Tom Hawkings pumped forward a free-kick into the opposition area and the ball was headed back for Joe Chamberlain to strike a stunning volley which gave keeper George Dorrington no chance whatsoever.

Odd Down, who won the reverse fixture 3-1 back in August, nearly equalised seven minutes later as defender Darius Davey hooked the ball against the home bar but the Wellington lead remained intact until the turnaround.

After the break, it was a different story as the hosts produced some scintillating attacking play to demolish the visitors with four more goals.

They doubled their lead after 55 minutes when Jack Bryant played in Matt Dawson and the striker thumped home his second goal in successive games since joining the club.

Keeper Tom Welch kept the score at 2-0 with an excellent double save before Wellington went further ahead on 65 minutes, Chamberlain sending over a perfect cross from the right for Tom Hawkings to rise and head home.

Three minutes later it was game over when some fine Wellington play ended with Dawson crossing for the irrepressible Chamberlain to smack home number four.

Wellington still weren’t finished and, with three minutes remaining, Conor Bryant – who had an excellent game having dropped back into midfield – played in sub Ollie Holman to produce a cool finish.

It could have been six from the last attack of the game as Holman’s shot came back off the inside of the post before the final whistle blew.

PHOTO: Man of the match was Joe Chamberlain, who received the award from supporter and former player Bob Trott.

A team through to cup semis