After a massively frustrating four weeks of postponements, the Reserves finally got back on the pitch and table-topping Crediton were the visitors. 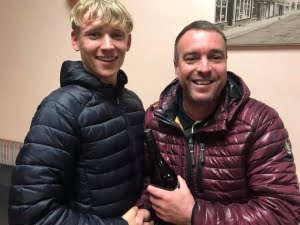 Wellington gave debuts to midfielder Brad Holmans and 16-year-old defender Danny Nicholls, both products of the successful A team, and there was also a recall for tough-tackling veteran Matt Holmes while Jamie Fleet took the armband with skipper Mark Owen out through injury.

Crediton started well, moving the ball around with confidence, but without too much threat early on. It was a tight affair for the majority of the first half although the better opportunities fell to Wellington.

Josh Baker fed a rejuvenated Luke Woodgate through the middle on 20 minutes. He rounded the onrushing keeper but his touch took him wide and the chance was soon gone. Welly created numerous half chances, but never really tested the opposition’s keeper.

They should have gone ahead on the half-hour when a free kick from the left was delivered deep to the far post. Tom Davies met it and headed back across goal when Fleet went close, but the ball was partially cleared. It fell invitingly to Woodgate just inside the box but the usually calm and instinctive striker fired his shot high.

Wellington were very well marshalled throughout by the centre back pairing of Fleet and Davies who had a solid look to them.

But their defence was breached on 37 minutes a powerful shot across goal was met by the strong hands of young keeper Rob Hall who somehow pushed the goalbound shot behind for a corner.

The half ended goalless with the home side just about ahead on points.

Playing up the slope for the second half, Wellington knew they needed to be more composed and clinical in the final third. The match continued in much the same fashion as the first with both sides working very hard, with lots of physical encounters and few clearcut chances.

The all-important goal came in the 63rd minute … and what a goal. Oli Nott collected the ball in the final third, high on the right. Cutting inside, he played a neat pass into Ash Saunders who calmly laid the ball off for Nott to move on to at pace. Bursting into the box he brushed off one defender before hitting an absolute screamer of a right-footed shot past a motionless keeper high into the far corner. It was that good, even the opposition applauded the strike.

Fresh legs were needed to see out the remaining 20 minutes and this saw the introduction of 17-year-olds Wes Poulsom (winger) and Robbie Broomhead (midfield) – both unlucky not start – for Saunders and Holmans.

The game continued to ebb and flow, but Wellington’s desire to hold out for the win was admirable, epitomised by the workrate and tackling back of Clay Westcott in midfield. Darren Mace replaced a tiring Holmes with 10 minutes remaining.

Wellington had one last chance on 82 minutes. A free kick on the right was delivered superbly by young Broomhead to the far post where fellow teen Nicholls stretched to head goalbound, but unfortunately straight into the chest of the away keeper.

Wellington deserved their win – not always pretty but the desire and effort was apparent for all to see.

Man-of-the-match went to young debutant Nicholls (pictured with Steve Trevelyan). His fearless defensive display, coupled with some marauding runs, was well appreciated by the watching faithful.

This win is the Reserves’ third on the bounce without conceding and sets them up nicely for next week’s away game at lowly Tipton St John. A win there will continue their rise up the table to where they deserve to be.

A team stretch lead at top