A last-minute goal earned the first team a 2-2 draw in their second pre-season friendly away to Axminster Town from the Peninsular League.

Wellington led 1-0 at half-time thanks to a 13th minute goal from Harry Walford, who robbed a defender before coolly slotting the ball between the home keeper’s legs. 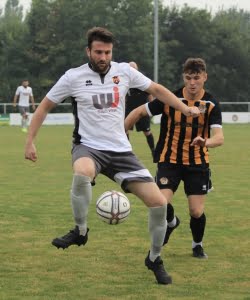 Manager Tim Legg rang the changes throughout the match to give the whole squad a decent run-out and Axminster took the lead in the second half with a pair of well-executed strikes.

But just as it looked like Wellington were heading for defeat, Jamie Vaughan-Ryall pounced on a defensive mix-up for the equaliser.

Wed 19th August vs Middlezoy.
Wed 26th August vs Exwick.
Sat 29th August vs Ilfracombe.
Fri 4th September vs Topsham.
***
We are continuing to re-shape the squad for the coming season with a string of new signings including keeper Chandler Hallett and midfielder Mason Raymond (following their release by Colchester United and Bristol Rovers respectively), brothers Miles and Jason Quick (Bishops Lydeard) and Jack Lewis (Staplegrove).
Youth awards handed over

Reserves return to action in Devon
Scroll to top