You are here: Home1 / Comfortable victory in third friendly 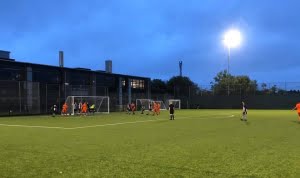 The match was played in three half-hour periods and Middlezoy went into a shock lead with a header from defender Jake Horsey, who had a spell with us last season.

However, the Wellington reply was immediate as Miles Quick played in Ollie Holman and his rasping shot flew past the Middlezoy keeper, who went on to produce a succession of fine saves to prevent a much bigger scoreline.

We went ahead before the first drinks break when a shot from Jamie Vaughan-Ryall smacked against the underside of the bar and Quick was on hand to convert the rebound.

The second period of the match was goalless but we added two more goals in the final session through Jesse Howe, who also had a penalty saved, and Josh Champion.

It was another impressive display and means our three matches have now yielded nine goals with only three conceded.

The friendlies conclude with trips to Exwick Villa on Wednesday, August 26th, and Ilfracombe on Saturday, August 29th.

The scheduled warm-up game at Topsham is now off because we start the season officially on Tuesday, September 1st (7.45), with an Emirates FA Cup extra-preliminary round tie at home to Bodmin Town from the SW Peninsular premier division.

Although we have been drawn at home, the Playing Field floodlights will not be back up in time and so the game has been switched to Cullompton Rangers, to whom we are very grateful for their co-operation.

Reserves return to action in Devon