You are here: Home1 / Another penalty shootout defeat

Wellington’s shootout curse struck again as they bowed out of the Vase to Hengrove from division one of the Toolstation League. 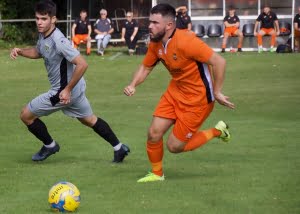 In their opening game of the season, Tim Legg’s side lost on penalties to Bodmin in the Emirates FA Cup and Saturday’s tie also finished 2-2 after 90 minutes before they lost out.

It had all started so well for Wellington who followed up their excellent display against Bridgwater Town in midweek by dominating the opening half-hour.

They took the lead after 28 minutes when a quickly-taken throw saw Howe wriggle towards the byline before crossing for Raymond to stroke the ball home.

But, after that, they rather lost their way and Hengrove equalised on the stroke of half-time. A cross was headed goalwards and, although stand-in keeper Miles Quick saved at full stretch, Georgio Mancini, drove home the rebound.

Hengrove then went ahead eight minutes after the break from another rebound, this time converted by Jack Jones after a shot had smacked against the post.

Legg made a triple substitution after 63 minutes – bringing on club skipper Glen Wright, Ollie Holman and new signing Scott Merritt – and they equalised with their best move of the game seven minutes later.

Some slick passing ended with Howe making room for himself before driving low past the wrong-footed Hengrove keeper Luke Crew.

Both sides huffed and puffed in vain for the breakthrough and, although Hengrove put their first penalty wide, Crew saved from Howe and Raymond to send the visitors through to play Street in the next round.

With no Les Phillips or Somerset Premier Cup competitions this season, the double shootout defeat means Wellington really can concentrate on the league!

Reserves get season off to flying start
Scroll to top