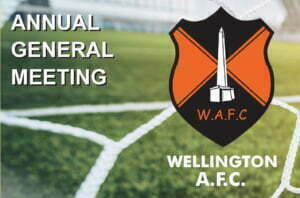 At our Annual General Meeting on Thursday, 1st July, the Treasurer, Reg Oxby, reported that revenues had been severely affected by the closure of the clubhouse on all but a few home match days and the season being brought to a premature end in January leaving the Club with a combined loss of £16,397 on the clubhouse and playing accounts.

Fortunately this had been well covered by FA grants towards repairs and improvements and government grants towards additional costs and loss of revenue during the Covid 19 pandemic.

A refund of historical bank charges would also allow the club to set aside a necessary contribution towards an FA grant to help fund the proposed development of a new site for senior football.  He added that the Club remained in a sound financial position to meet the demands of re-opening and the forthcoming season.

In opening the meeting Club Chairman, Mike Hall, said that in football terms it had been a trying year with the uncertainty of if and when football would be played and all of the associated restrictions in place due to the pandemic.

He paid tribute to the club’s officers for their hard work and also thanked all team managers, bar staff and volunteers for the team effort everybody showed in supporting the club.

Mr Hall extended the Club’s thanks to Sean Buttle and David Darch for the work they had done with the Reserves and welcomed Steve Trevelyan and his assistant, James Baker who have taken over the management of the team.

In his Secretary’s report, Jeff Brown, said that the First Team under manager, Tim Legg, were showing signs of progress in a very competitive Toolstation Western League and were in 17th place when the season was brought to a close.

As a result of the FA’s restructuring of non-league football some of the existing teams in the League have been replaced by new teams from Devon and Cornwall which will provide new challenges for the coming season.

The Reserves under the guidance of Sean Buttle and David Darch were top of Division 1 West in the Devon and Exeter League when the season was terminated with seven wins from seven games but after consideration elected not to take part in the League’s Covid competition.  The format of the Devon & Exeter League for the forthcoming season has not yet been finalised, but it is hoped that the Reserves will remain in the First Division.

The A team found life much more challenging following their promotion to Division 1 of the Taunton Saturday League but were beginning to show signs of improvement under manager, Luke O’Hara when the season culminated. They did, however, win the previous season’s postponed Seward Cup Final at Minehead against Castle Moat Reserves in a penalty shoot-out and then won their group final in the League’s Covid Cup beating Staplegrove Spartans in the final 1-0.

The Ladies team also had a disrupted season under manager Nyima Touray and coach Anthony Trimm in Division 2 of the Somerset Womens League but again showed signs of improvement following the break and finished in third place.

The Under 18s season was frustrated again by continual postponements and was ultimately abandoned and manager Kevin Forrest and his assistant Adam Thornton will hoping for a more fruitful campaign with many of the younger players supporting the A team.

Such a large diversity of teams experiencing mixed fortunes on the pitch requires a continuing small army of helpers and we must thank all those who have worked hard to ensure that such a large number of adults and young people are able to enjoy the game.

Mr Brown said the club continued to pursue its interest in locating some of its activities to Longforth Farm and are hoping for some encouraging news on Council support and funding before proceeding to engage in further expenditure to confirm the suitability to establish a new First Team facility.  This would then free-up the Playing Field for other teams to use and hopefully trigger a programme to improve other facilities.