Pipped by leaders in five-goal thriller

You are here: Home1 / Pipped by leaders in five-goal thriller

Wellington suffered an agonising defeat by leaders Bitton in their first match of the season at the Playing Field and their first appearance in front of their own fans in ten-and-a-half months. 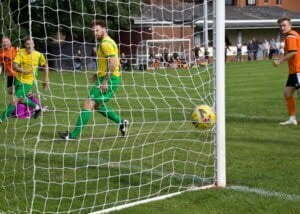 They will have been bitterly disappointed to lose a pulsating contest but could take heart from again displaying their improvement under the management of Tim Legg whose side showed they are a match for anyone in a tough division.

After the midweek thumping of bottom club Bridport, it was no surprise that Legg named unchanged starting 11 against the highly-rated Bristol outfit.

But they got off to the worst possible start by falling behind after only two minutes. From a free-kick outside their area, Wellington gave the ball away straight to Dean Griffiths and the striker made room for himself before driving low across keeper Shay Allen.

Legg’s side show plenty of character these days and they picked themselves up to take the game to Bitton and hit back with a double strike to earn a half-time lead.

They drew level after 22 minutes as Jack Bown-Porter’s low cross from the left eventually broke to Miles Quick who buried the opportunity just inside the opposite post (pictured).

Five minutes later it was 2-1 with an exquisite finish by striker Jake Quick who has proved such an asset since joining from Bishops Lydeard. Running on to a long ball over the top, he coolly lobbed keeper Matthew Dunk to the delight of the home supporters.

It was an entertaining game throughout and both sides had their chances after the break.

Young keeper Allen pulled off a couple of cracking saves while, at the other end, Sam Towler was thwarted by Dunk in a one-on-one and sub Nathan Byrne saw a shot come back off the inside of the post.

But it was Bitton who struck twice to seal the points, Ben Withey putting them on level terms after 64 minutes by converting a cross at the far post.

Wellington will have been kicking themselves for gifting the visitors a second goal, and what proved to be the winner, with 12 minutes remaining.

They again gave the ball away again and, after a shot hit the post, the dangerous Griffiths pounced to net his second of the game.