You are here: Home1 / Three important points from first double

Wellington bounced back from three successive league defeats by completing their first premier division double of the season at the Playing Field. 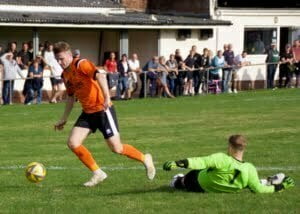 It was an important victory for Tim Legg’s side over a team below them in the table but who had knocked Taunton Town out of the Somerset Premier Cup in midweek.

His line-up included new signing Douglas Camilo, who had been Bishops Lydeard’s star player in their recent FA Vase tie against Wellington.

And he made an immediate impact by setting up the opening goal after only two minutes with a delightful pass to midfielder Miles Quick who did well to complete a clinical finish from a tight angle.

But, as has happened for too often this season, Wellington then gifted their opponents a goal as Backwell equalised only nine minutes later.

The ball was given away needlessly and Brad Skidmore shot home past keeper Shay Allen.

Wellington regained the lead after 19 minutes with a cracking goal. Sam Towler found Jack Bown-Porter who crossed to Jake Quick and he thumped the ball home off the underside of the bar.

The lead was again short-lived with Backwell awarded a penalty for a foul by Mason Raymond on the half-hour, Joe Bishop making no mistake from the spot.

It looked like the half would end 2-2 but, in stoppage time, Wellington went ahead for the third time. Jake Quick was sent racing clear by Towler and he coolly rounded keeper George Dorrnigton for his second of the game. 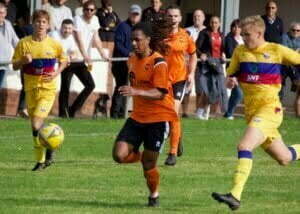 Miles Quick twice went close to extending Wellington’s lead early in the second half and was also denied in a one-on-one by Dorrington.

But a one-goal lead was never comfortable and Backwell pressed for another equaliser without success as the home defence held firm.

Shootout defeat in the Premier Cup

Jason is honoured by county FA
Scroll to top