You are here: Home1 / Late goals earn a thrilling draw

Trailing 2-0 with only a few minutes of normal time remaining, it looked like it would become five defeats on the trot – all without scoring – before two very late goals earned them a deserved point. 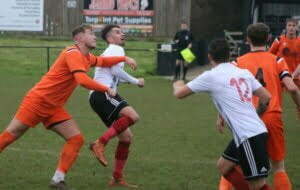 Indeed, while the draw was a fair result, it was the weather which won the day as a fierce wind roared from end-to-end on an increasingly heavy pitch, making good football virtually impossible.

Wellington had conditions in their favour from the kick-off yet it was Millbrook – looking for revenge after an FA Vase defeat on their ground in October – who scored from a rare foray into the visitors’ half.

After 27 minutes, Ryan Knight raced down the wing and his low cross was converted by Sean Thompson.

Wellington’s goal drought continued and, unable to hit back before the break, they knew they had a mountain to climb with the wind in the faces for the second half.

Legg gambled with a double substitution at half-time, bringing on Jordan Casey and Jason Quick in place of Josh Baker and Douglas Camilo, and both were to play pivotal roles … but much later in the game.

Things went from bad to worse as Millbrook doubled their advantage after 62 minutes – this time Knight went on his own as he cut inside from the right to shoot across keeper Shay Allen.

The conditions were summed up by Allen having to be on his toes to deal with clearances from his opposite number and it looked like game over – even when Wellington finally ended their goal drought after 86 minutes.

Jason Quick won the ball and played it forward to Casey who brought it under control before slamming home an unstoppable shot from just outside the Millbrook box.

That got Wellington’s tails up and they conjured up an equaliser in the first minute of stoppage time.

Nathan Byrne sent over a low cross from the left which found Casey who played the ball goalwards for Jake Quick to prod it over the line and spark wild celebrations among the visiting players and supporters.

What a day and what an ending!

Ladies back on top after seven-goal salvo
Scroll to top