Wellington saved their best home performance until last with a wonderful fightback to dent second-placed Mousehole’s hopes of gaining promotion at the first attempt.

They trailed the highly-rated Cornish outfit 2-0 at the break of their final home game but controlled the second half to earn a well-deserved point.

With manager Tim Legg away, coach Alex Pope named an unchanged starting 11 after the fine win over Millbrook and they had to weather an early storm from a Mousehole side who have made a huge impression on their debut Toolstation season. 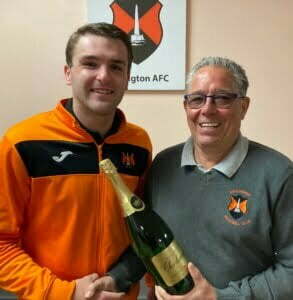 Wellington gradually got into the game only to be stunned by two goals in three minutes from striker Callam Mconie.

He pounced to drive past keeper Rob Hall after 36 minutes and then produced an even better finish with a curling shot shortly afterwards.

That put Mousehole – locked in a three-way fight at the top with Tavistock and Exmouth – in control but Wellington were far from beaten.

Pope made a tactical sub at the break, changing things round to introduce Jordan Casey up front in place of midfielder Glen Wright.

They almost pulled one back straight away but Jake Quick’s goalbound effort was clawed back by keeper Ollie Chenoweth with the assistant ruling the ball had not crossed the line.

However, they were not to be denied and reduced the arrears with a glorious goal on the hour.

Casey collected the ball outside the box, turned and gave keeper Ollie Chenoweth no chance with a superb shot.

Wellington were totally in control as they took the wind out of Mousehole’s sails and deservedly drew level with ten minutes remaining.

Man-of-the-match Mark Cornish played an excellent ball over the top and Jake Quick ran on to poke it past the onrushing Chenoweth.

Mousehole had to survive a desperate scramble shortly afterwards while Rob Hall in the home goal produced a smart save near the end of a wonderful advert for Toolstation League football.

Wellington, who drew 3-3 at Mousehole on the opening day of the season, had again shown that – on their day – they are a match for any team in an incredibly strong division.

Our Ladies bow out of league cup
Scroll to top