You are here: Home1 / Ladies end great season in style 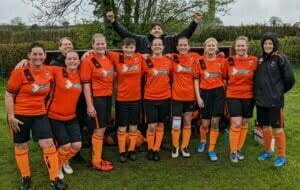 After point and fixture adjustments were made to the league earlier in the weekend, Wellington claimed a fantastic second place in division two before visiting Combe St Nicholas for their final game of the season.

Although the league positions were already decided going into this game, it delivered plenty of entertainment as both sides scored most of the goals in the early stages.

Combe St Nicholas opened their tally in the first 60 seconds of the very wet afternoon, only for Chan Bowle to grab a swift equaliser in the fourth minute with her first of the campaign.

A few minutes later and Tash Hole – Wellington and the division’s top scorer – blasted home her side’s second before, almost immediately, Combe struck back with their own second goal.

With the scoreline at 2-2 after just 11 minutes, the spectators were treated to another just three minutes later. After a fantastic passage of play Wellington’s third was poked in by one of Combe’s own defenders, gifting the Tangerines the lead.

Determined to put some space between her and the competition in the division’s race for top scorer, Tash guided home a remarkable curled shot from just outside the 18-yard box, also putting some space between the two sides in the process.

Going into the second half at 4-2, as they have done all campaign, Wellington pushed for more and created chance after chance, but had to wait until captain Zoe Armitage was brought down in the box to win a penalty which was beautifully converted by Jess Regan.

As the second half went on it was proving more and more difficult for players to stay on their feet due to the wet conditions so the chances were pouring in as players made unforced errors to allow the opposition through on goal.

Fantastic efforts from the likes of player-of-the-match Helen Stevenson kept Combe from getting any more through and the final goal of the afternoon would not come from an obvious chance.

Wellington centre back Katy Hussey carried the ball out from defence, into midfield only to rocket home a goal of the season contending strike from just inside the Combe half. This cemented the win for Wellington and gave the Ladies a well-deserved high to a brilliant campaign.

Wellington bounced back from the previous week’s defeat against now champions Wells and showed the composure and talent they’ve demonstrated week in, week out.

Every player will look back on this season with pride while also looking forward to the 2022-23 season as they hope to challenge for the league title again.

Wellington Ladies would like to thank all the fans for their spectacular ongoing support, and would like to dedicate this amazing second-place achievement to the late Tangerines fan and friend, Frank Barker.

Plenty of football still to play