You are here: Home1 / Christmas cheer in six-goal thriller

Wellington were able to give their supporters a little Christmas cheer with a much-improved performance against Cribbs in an entertaining game at the Playing Field on Saturday, 22nd December

The game was played at a furious pace considering the sticky conditions and, after Wellington exerted early pressure with Josh Wadham and Glen Wright having shooting opportunities, Cribbs demonstrated why they have enjoyed a good run, and are still in, the FA Vase as well as having very creditable draws with both Bridgwater Town and Willand in November.

Their dominance in the air and slick passing and pace frequently had Wellington on the back-foot but the home team hit back and Joe Chamberlain was only just wide when Jack Bryant played him in and he beat keeper Tyler Edmunds to the ball.

Shortly after, in the 23rd minute, Wright won possession with a tremendous tackle and Sam Bryant played the ball quickly forward to brother Conor who turned his marker and beat the keeper from 25 yards with a well struck ground shot into the far corner.

They then doubled their lead following good work by Jack Bown-Porter and Conor Bryant who laid the ball back to Wadham and he hit an unstoppable shot into the top corner again from 25 yards out.

Cribbs, however, kept pressurising particularly from corners, one of which caused panic before being cleared with two goal-bound shots 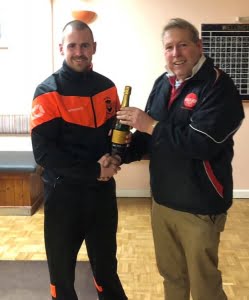 being blocked by defenders. They reduced the arrears four minutes before the break as the impressive Jake Hodgson fed the ball to Sol Wantau-Smith and his cross found Jason Vincent free at the far post to score although Mitch Woodgate, who proved an able deputy keeper throughout, got a hand to the ball.

Paulo Borges replaced Jack Bryant, suffering a recurrence of his injury, after the break with Conor Bryant dropping back into midfield.

Vincent had a chance to equalise but could only find the side netting before Wellington restored their two-goal advantage when Bown-Porter put a ball over the top for Chamberlain to chase and, when Edmunds came out but failed to collect, the persistent Chamberlain recovered the ball from the goal-line, brought it back into play and beat the keeper with a superb shot into the far corner.

Cribbs came storming back and, after Bown-Porter had blocked a shot, Vincent turned on the edge of the box to shoot with the ball evading Tim Legg and getting a deflection off Scott Drayton before going into the far corner giving Woodgate no chance, on the hour.

Seven minutes later the scores were level when Hodgson burst forward to shoot from 30 yards out and the ball bobbled a little and evaded the despairing dive of Woodgate and went just inside the upright.

Five minutes later a lunge just inside the box saw Ben Newman concede a penalty and, with Charlie Aldom stepping up to take the spot-kick it looked as if Wellington were going to fall behind, but he elected to shoot straight down the middle and Woodgate blocked his effort and the ball was cleared.

Connor Pengelly replaced Newman as Wellington struggled to gain meaningful possession but we rallied at the end and looked slightly the more likely to score before the final whistle ending what was a very enjoyable match to watch.

Man of the match was Scott Drayton, who was chosen by supporter and ex-player John Jenkins. The award was presented by one of the club’s sponsors, Graham Sparks.