You are here: Home1 / Deserved point from Boxing Day derby

Wellington continued the fine form shown in their previous game against Cribbs with a spirited performance against third placed Bridgwater Town on Boxing Day at the Playing Field in front of a large crowd in a very entertaining game.

The Bridgwater team contained no fewer than six ex-Wellington players so the game was always going to be competitive and indeed it was, at times, a little feisty.

Play swung from end to end from the start with both defences being tested but, after Harry Horton brought a spectacular save from Josh Mclean, Wellington rose to the occasion with Kai Fisher, stepping in for this one game, putting in his most influential performance for the Tangerines and the remainder of the back line doing well.

Up front, Wellington’s attack of Conor Bryant, Joe Chamberlain and Josh Wadham showed a willingness to work and frequently tested their opponents.

With quarter of an hour on the clock Fisher won a header and the ball fell to Conor Bryant who fed Chamberlain who cut in from the left and spectacularly shot into the far corner of the net from the edge of the box beating the despairing dive of Jake Viney.

The visitors were stung and hit back with Jake Llewellyn striking a free kick just past the upright and Sam Towler putting a long range effort just over the bar following a poor clearance by Mclean. 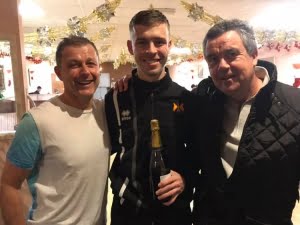 Former Wellington skipper Tom Ellis was forced to leave the field with an injury before Glen Wright laid a ball back to Ben Newman whose shot was just of target as half-time approached.

Ollie Nott replaced Chamberlain, who had picked up an injury, at the break and shortly after the restart ex-Wellington duo Ian Bellinger and Jack Taylor combined with Taylor heading the cross just wide of the target.

With half an hour remaining Sam Bryant sustained a hamstring injury and was replaced by Scott Townsend as Welly tried to increase their slender lead. Wadham and Wright combined with the latter shooting just wide before George Rogers set up Wright who had Viney at full stretch to save.

Wellington were under pressure to contain their opponents but were holding their own until in the 84th minute substitute Jake Brown forged into the box and was judged to have been fouled by Fisher and the referee, controversially, pointed to the spot.

Wellington players protested but could do nothing as Jake Llewellyn stepped up to blast the ball into the corner and equalise.

Bridgwater came close to stealing all three points when Bellinger passed inside to Taylor but the striker could only shoot into the side netting under pressure. Wellington refused to lie down and went on the offensive themselves before the final whistle.

A rousing game well suited to the festive season and fully enjoyed by the enthusiastic crowd.

Conor Bryant was named man-of-the match and is pictured being presented with the award by Barry Bartram and Mike Rogers.

First team end 2018 on a losing note
Scroll to top