It was back to earth with a severe bump for Wellington when they travelled to Bitton on Saturday, 29th December, without several key players.

The game could not have started better when, with only 40 seconds on the clock, Josh Mclean cleared the ball to Mitch Woodgate who laid it back to George Rogers and, spotting goalie Dave Worton off his line, hit a perfect shot from fully 35 yards over his head an into the net.

Welly supporters were however brought down to earth as Bitton stormed back and their lively forwards were soon causing problems. Skipper Sam Bryant, suffering a recurrence of his injury on Boxing Day, had to be replaced by brother Jack after just ten minutes while Sam Jones was also forced out of the action by injury before the break. 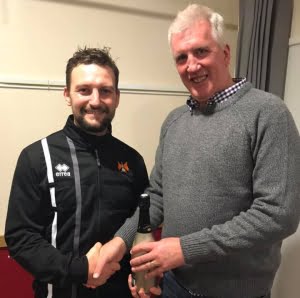 Inevitably Bitton equalised after Wellington’s defence were caught out of position and Josh Egan set up Joe McClellan for an easy finish.

Two minutes later, Mclean punched a ball that he could have caught just to the edge of the box and McClelland thumped it back past the keeper to complete the turnaround.  The bombardment continued but Wellington survived until the interval and could have gone in level but Worton brought off a good save when Woodgate turned on the edge of the box and hit a left foot shot that would have found the corner of the net.

Welly did not survive long after the restart and conceded another two goals inside two minutes.  Centre-forward Dean Griffiths forced his way past Drayton to beat Mclean at the near post and Egan was able to shoot home from the edge of the box to give them an unassailable 4-1 lead.

Somehow Welly battled and prevented any further score although the home side, prompted by the energetic Aysa Corrick, squandered good possession with poor finishing.

Wellington rallied a little at the end and Conor Bryant was unlucky to see his header hit the crossbar.

Tim Legg was, quite rightly, Wellington’s man of-the-match and is pictured receiving the award from Andy Govier.