You are here: Home1 / Battling display in Devon defeat

Wellington travelled to Newton Abbot on Saturday, 12th January, to play Buckland Athletic and came away empty handed, the two teams having drawn 0- 0 earlier in the season.

The game was only five minutes old when Liam Head sent a high ball in towards the Wellington goal and a deft push on Scott Drayton allowed Ryan Bush to win a glancing header at the near post which deceived keeper Josh Mclean and found its way into the far side of the goal giving the home side the lead.

Buckland kept up the pressure and Bush had the visitors at full stretch and set up Richard Groves who shot wildly over the bar. Shortly after Todd, up for a corner, won a header at the far post which evaded Mclean, was scrambled away only to be followed up by a fierce shot which was blocked on the line.

Wellington weathered the storm and gradually clawed their way back into the game with some resolute defending and hard work in the midfield allowing the front three to get a foothold in the game. 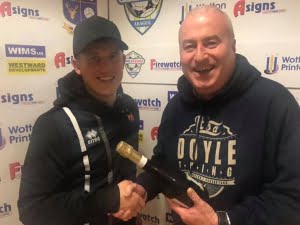 The hardworking Bush provided Groves with another opportunity which he squandered while, at the other end, Wadham had Griffiths at full stretch and Buckland were somewhat fortunate to scramble the loose ball clear at the second attempt.

Shortly before the interval Buckland increased their lead somewhat against the run of play when James Richards picked up a ball well into the Wellington half and went on a mazy run in which he waltzed past three defenders before shooting into the top corner of the net from the edge of the area, giving Mclean no chance.

Tom Hawkings replaced Mitch Woodgate at the interval with Buckland setting the pace and exerting early pressure particularly at set pieces which, with their superior height, they were able to dominate and from a corner and a resulting scramble Mclean made a great save at the foot of the post to prevent a further score.

Sam Jones replaced Jack Bryant as Glen Wright, skipper for the day, played a good ball into the box which Griffiths could only palm down and a defender appeared to handle but the referee ignored the visitors’ appeals.

Wellington’s best chance of the game fell to Chamberlain when a Buckland defender’s attempt to clear the ball rebounded off a colleague leaving the Tangerines top scorer clear but Griffiths was quickly off his line to smother the shot.

A Chamberlain cross also fizzed across the face of Griffiths’ goal but no one was on hand to take advantage while, at the other end, Mclean was called on to cut out a dangerous cross before saving well from Groves right at the death.

Chamberlain was named man-of-the-match and the award was presented by supporter Tom Doyle.

Great win for the A team
Scroll to top