Wellington entertained Roman Glass St George in the Toolstation Western League Premier Division and came from behind to gain a much-needed win which saw them move up to 12th place in the table.
With top scorer Joe Chamberlain unavailable for two weeks, manager Clive Jones was able to add Lewis Tasker, who was a member of the Street team which gained promotion from the Western League last season and who has been with Tiverton Town this campaign, to his team and brought Tom Hawkings off the bench to replace Mitch Woodgate.
Wellington were quick out of the blocks and Conor Bryant set up Josh Wadham with an early opportunity which saw him free on the right to cut in and beat keeper Josh Dempsey only to see his shot narrowly miss the far post.
A few minutes later good play between Conor Bryant and Jack Bown-Porter produced a cross to the right which the incoming Wadham met on the volley but could only find the side netting.
Roman Glass hit back with a quick break which ended with a poor shot from the edge of the box but then a mix-up between Tim Legg and keeper Josh Mclean presented them with another chance but Legg recovered well to block the shot. 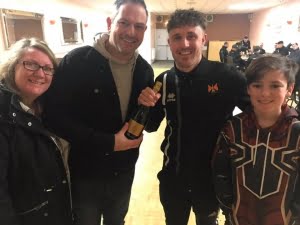 With only six minutes gone, Conor Bryant and the visitors’ defender David Doe clashed heads in an aerial challenge and while Doe was able to continue after treatment, the Wellington striker was whisked off to hospital having sustained a nasty cut around his right eye and was replaced by Sam Jones with Hawkings moving up into the attack.
Play swung from end to end and the home team were unlucky not to take the lead when Hawkings rose to meet a Tasker corner and his firm header thumped against the crossbar.
The Bristol side came close when a good break saw Ryan Radford set up Jordan Lam whose well struck shot appeared to be going in until Mclean flew across his goal to punch the ball around the upright.
They were not to be denied, however, and with half-an-hour gone imposing mid-fielder Sam Wentland met a corner on the half-volley and gave Mclean no chance as the ball flew into the net.
Wellington did their best to level the scores through Hawkings and Jack Bryant and were unable to capitalise on a Bown-Porter header across the face of the goal.
Anyone dwelling on their half-time refreshments would have missed the action after the restart as within a few minutes Tasker, playing in a more central role than wide on the flank, shot from outside the box and the ball evaded several defenders and deceived keeper Dempsey, who dived in vain, as it crept inside the upright to level the scores.
Just a minute later Tasker turned provider as he set up Hawkings who ran into space and beat Dempsey as he advanced with a well-placed shot, giving Wellington a somewhat unexpected lead.
Roman Glass were stung into action and Radford had a shot saved by Mclean and Rhys Hodgson headed over from a good position before they were reduced to ten men when, after being booked for persistent fouling, Ibrahim Sarr had a fit of petulance when another decision went against him and he received a second yellow and was dismissed.
Play became a little scrappy as Wellington dropped deeper to defend their lead and Lewis Pocock replaced George Rogers and later Paulo Borges replaced Jones.
They weathered the storm and could have made the game safe towards the end when Wadham tested the keeper following a good run and then combined with Jack Bryant to set up Hawkings whose goal-bound shot was blocked with the rebound going to Borges but his header across the face of the goal was wide of the target.

A minute’s silence was held before the game in memory of club stalwart Neil Jenkins, who passed away recently.

PHOTO: Josh Wadham was named man-of-the-match with the award chosen and presented by supporters Chris and Laura Brooks and Locky. To see action shots from the game, go to the ‘Latest Photos’ gallery on the homepage.

England call-up for our Brooke
Scroll to top