England call-up for our Brooke

You are here: Home1 / England call-up for our Brooke

We are delighted to report on an international call-up for one of our youth players, who has a very familiar surname! Gill Paltridge, from the Around Wellington news site, writes as follows:

Local footballer Brooke Aspin’s outstanding talent and potential have been recognised in her selection for the English Schools Under 15 girls’ squad.

Brooke (13) will play in the Five Nations Girls’ Schools Under 15 International Competition in Salou, Spain, in April. Her selection is doubly impressive because of her age and the fact that only 18 young players from around the country have been chosen for the competition. 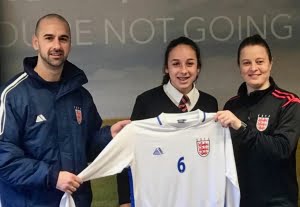 Brooke, who is in Year 9 at Court Fields School, began playing football when she was seven. She played for Wellington Under 9s and made her way up through the age groups before being selected for Somerset Girls’ team.

Now she plays on Saturdays for Taunton Saints, at centre half in a boys’ team with links to Southampton. She is the only girl in a squad currently top of the South West Division of the Junior Premier League.

Her grandfather, Graham Aspin, Vice Chairman of Wellington AFC, said, “Brooke has been playing with better, stronger players but still helps out occasionally for Wellington U14s.”

Graham explained the selection process: “Brooke was recommended for selection by Somerset Girls’ coaches who could only recommend three players. She had a trial for the South West team, then a further trial at Stafford where a SW/SE team competed against teams from the Midlands, the NW and the NE and was then picked from there.”

Brooke has just picked up her England kit and her next commitment is a week’s training in Holland in February before the Five Nations Tournament in Salou in April.

Brooke has a valuable family football pedigree to draw on: her great grandfather, Selwyn, was a stalwart of Wellington AFC – club chairman, first team and youth team manager before his death in 2012 and has the club’s stand named in his honour – while both her Graham and her father Craig played for the club.

Another of our youth players, Danny Nichols, has again been selected for the Under 16 Somerset FA squad – this time to play Gloucestershire at Almondsbury on Sunday, February 3rd, kick-off 2pm.

In-form A team in seven heaven
Scroll to top