Defeat under lights by title challengers

You are here: Home1 / Defeat under lights by title challengers

Wellington entertained Plymouth Parkway in a rearranged league game at the Playing Field and were well beaten by the impressive Devon team who had easily won the Peninsula League last season. It gave them the double, having beaten Welly 5-0 earlier in the season as they try to close the gap on the leaders.

Wellington, with Sam Bryant, Scott Drayton and Lewis Tasker unavailable, did well in the first half to keep a clean sheet but were rarely able to trouble their opponents defence whereas a number of quick breaks and corners posed plenty of problems at the other end. 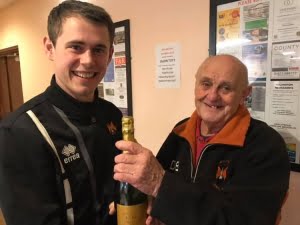 Both Ryan Lane and defender Rob Farkins were off-target with far post headers and Mickey Williams found himself clear when Wellington lost possession going forward but instead of shooting when left one-on-one with keeper Josh Mclean crossed to the far post where a surprised Jordan Annear squandered the opportunity.

Wellington did better for a while but giving away possession resulted in both Tom Hawkings and Jack Porter having to make timely covering tackles while Tim Legg and George Rogers seemed to be in constant action.

Wellington were able to mount a few attacks and Joe Chamberlain just failed to make contact with a Conor Bryant cross at the far post while centre-forward Bryant and Glen Wright had attempted shots blocked just before the break.

Mitch Woodgate replaced the injured Joe Chamberlain before the restart but Wellington did not survive long after the break. A moment’s hesitation between Legg, who worked tirelessly marshalling the defence, and Mclean allowed Annear to nip in between and slot the ball home.

A few minutes later, and before Wellington could recover, Williams got in behind the defence all too easily and Mclean rushed out to intercept but a desperate lunge saw him trip his opponent. Centre-forward Adam Carter converted the resulting penalty and it was virtually ‘game over’.

Parkway sealed the win when another quick break resulted in Lane hitting a cracking ground shot from well outside the box into the far corner after 70 minutes.

Lewis Pocock and Connor Pengelly replaced George Rogers and Connor Bryant as Wellington battled on to the final whistle.

Glen Wright was given the ‘Man of the Match’ award by first-team helper Des Badcock, having toiled manfully in midfield.

First team at the double in Bristol

A team pipped by league leaders
Scroll to top