A team pipped by league leaders

You are here: Home1 / A team pipped by league leaders

Welly went into the game with no less than seven players unavailable against top-of-the-table and unbeaten Wembdon.

The game started at a fast pace with both teams attacking with real intent, Liam Thorne scoring a screamer to put Welly 1-0 after 20 minutes. Wembdon started to get on top and equalised ten minutes later.

Welly kept their heads up and carried on working hard and, with just under ten minutes left of the first half, got themselves back in front through player-boss Luke O’Hara.

Wembdon stepped up a couple of gears in the second half and really started to press and push Welly back. 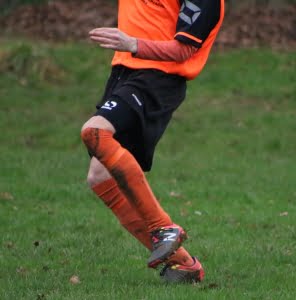 Welly man-of-the-match Nigel Letten was first to every cross and through ball until a silly free kick was given away with 65 minutes on the clock and a man free at the back post made it 2-2.

The Welly boys rolled their sleeves up and gave 110%, almost retaking the lead with a Oli Ghazala cross and Chris Cannon shooting a foot wide of the goal.

But Wembdon continued to dominate possession and got their reward with six minutes left to play. The ball was crossed in with Jared Holder pulling off a great save but there was the Wembdon winger to tap in the rebound.

The last five minutes was end-to-end but Welly couldn’t carve open another decent chance to try and get something out of the game.

Defeat under lights by title challengers

Three wins on the bounce for rampant Reserves
Scroll to top