You are here: Home1 / Ladies hit strugglers for six

Our ladies played away to fellow strugglers Combe, who were unable to field a full side and so set up to “park the bus” and frustrate their opponents. 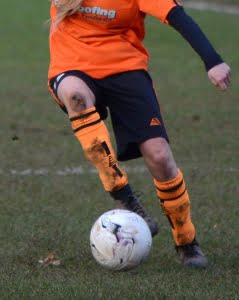 It was Combe who went in front within the first five minutes from a total mix-up at the back, resulting in an own goal. Wellington struggled to break down their defensive set up until Ashleigh Grabham went through one-on-one with the keeper to slot home and level the score. With Wellington applying all the pressure, the home keeper parried a shot only for Maxine Pontin to smash home and make it 2-1 to Wellington at half-time.

After a poor performance in the first half, Wellington needed to raise their game and this came through a much improved team effort. Ebony Sellick fired through a crowded area to net the third of the afternoon and the second half continued in the same vein with further goals from Charlotte Phillips a second for Sellick and a second for Pontin.

Our ladies ran out comfortable winners in the end and 6-1 was a good result, but they will need to raise their game for the next match at home to Frome.