You are here: Home1 / First team go down to title hopefuls

Three was definitely Wellington’s unlucky number as they returned to action against title-chasing Bitton at the Playing Field.​

They were playing again after a three-week break but suffered their third successive home defeat against a side lying third in the division. 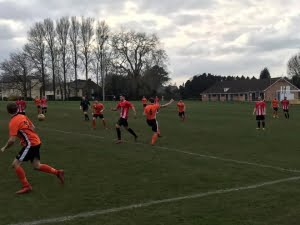 Ironically, after their lengthy lay-off, manager Clive Jones opted to play three at the back with Mitch Woodgate coming in to join Tim Legg and Scott Drayton and it looked like a sound move as his side led at the break despite having their backs to the wall for much of the first half.​

Big-spending Bitton almost went ahead in the first minute when Josh Egan’s shot smacked against the underside of the bar and came out with the referee’s assistant ruling the ball had not crossed the line.​

At the other end, Joe Chamberlain was cleverly played in by Conor Bryant but keeper Sam Burgess did well to block his shot.​

But that proved a rare attack for Wellington, who were forced on to the back foot as their opponents swarmed forward without getting the breakthrough.​

And, football can be a funny old game, because with five minutes of the first half remaining, Wellington took the lead completely against the run of play.​

Bitton failed to properly deal with a ball over the top and Chamberlain ran on to, this time, provide a clinical finish.​

The visitors must have been shaking their heads at going into the break behind but their reaction after the restart was almost immediate as two quick goals put them ahead and, ultimately, sealed the points.​

They went ahead after 48 minutes when the ball was played out to sub Joe McClennan on the left and his stunning half-volley left keeper Josh Mclean grasping for air.​

Almost immediately, Bitton went forward again and McClennan went down in the box under a challenge by Drayton and Dean Griffiths coolly sent Mclean the wrong way from the penalty spot.​

Despite falling behind and being under the cosh, Wellington were still in with a sniff but a couple of flashpoints resulting in yellow cards for Josh Wadham and Chamberlain saw them both receive yellow cards and then sensibly replaced by Jones.​

Unfortunately, that blunted Wellington’s attacking edge and Bitton were able to ease to victory with substitute Aysa Corrick heading against the underside of the bar with seven minutes remaining.​

Wellington now have six games remaining – two at home and four away – with ten points needed to improve on last season’s final tally.

Midweek victory for the A team
Scroll to top