You are here: Home1 / First team’s run of defeats continues

Wellington travelled to Chipping Sodbury hoping to pick up some valuable points but came away empty handed.

A 7-2 home win in November would have filled them with some optimism but unavailability and then players dropping out at the last minute forced manager Clive Jones to patch up his side, particularly at the back.

The hard and slightly bumpy pitch made control difficult at times and put Wellington at somewhat of a disadvantage as the taller home team were able to, on the whole, dominate ball in the air.

The game was only ten minutes old when a corner from the right found Dan Brown at the far post and he was able to head against the upright before picking up the rebound and netting much to stand-in keeper Mitch Woodgate’s dismay. 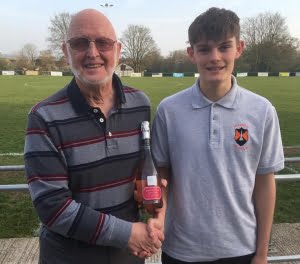 The visitors were given some incentive when the ‘Sods’ centre-forward George Box received a straight red for using foul language to the referee and, shortly after, had a Joe Wylie shot blocked and another effort from Jack Bryant that was just wide of the far post.

Woodgate saved a header on the half-hour but was left exposed when Luke Henderson picked up a long ball to round the keeper and give the home team a 2-0 lead. Just before the break, Josh Wadham had a well=struck shot from outside the box but it went straight to goalie Ross Grimshaw.

Wellington adjusted their line-up in the interval and enjoyed their best spell of the game and Wylie, who impressed on his full debut and grew in confidence as the game progressed, set up Jack Bryant whose drive from the edge of the box was only just over. Wylie had another attempt blocked before Jack Bryant was switched to a defensive role when Paulo Borges replaced Scott Townsend.

Wellington’s man advantage was far from evident as they struggled to get back into the game and the lively Conor Bryant was well shackled by ‘Sods’ skipper Steve Fitzpatrick withseveral other players not making a good enough contribution.

Jack Bryant made a great tackle to deny Joe Shutt but, in the 83rd minute, Luke Burman crossed from the left for substitute Jake Thomas to head home and complete the scoring.

Dominant A team settle for a draw
Scroll to top