You are here: Home1 / Awards night crowns end of season

The club held its Annual Dinner and Presentation Evening at the Beambridge Inn with a total of 99 players, committee, sponsors and supporters enjoying a carvery dinner and disco. 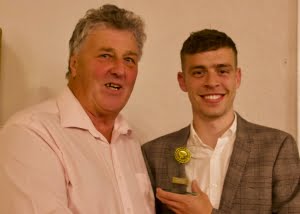 Opening the evening, Chairman, Mike Hall, welcomed everybody including guests Bob and Jane Trott from the Cricket Club, John Dunbar and Bill Sherwin from the Rugby Club together with representatives from Club Sponsors, C&C Carpets, AJ Shire Electrical, Mike Rogers and Fox Electrical.

He also thanked other main Club Sponsors who were unable to attend, RW Gale, County Roofing, WJ Roadmarking and all other local firms and individuals who had helped the club through sponsorship during the season.

The majority of the awards were presented by the Club President, Alan Shire.

Before dinner, the first of the awards to be presented were to the Ladies’ Team who play in the Somerset County Women’s League. John Sellick explained that he had taken over as manager at the beginning of the season after previously running the Under 16 Wellington Wildcats girls’ team.

The team had gone through a number of changes during the season, with a number of previous players leaving and new players being brought in, and they finished the season bottom but one of the league but hopefully have a good base to build on for next season. John thanked the club for their support for the team and announced the following award winners:

Luke O’Hara, the A Team Manager, explained that this had been his first season in charge of the A Team, having taken over from Ben Welch at the beginning of the season. This was also the first season the team played in the Invest Southwest Taunton Saturday League Division Three having previously played in the Macron Devon & Exeter League.

With one game left to play, the team were currently in fourth place in the league and with a win could move into third place. Before presenting the awards, Luke thanked the Committee for their support and also thanked Tom Davies and Jared Holder for their assistance in running the team when he was unable to be present. In turn, Tom Davies then thanked Luke on behalf of the team. A Team award winners were:

After dinner, the presentation of awards continued with the Under 18s who play in the Somerset Floodlight Youth League. Manager, Paul Pocock paid credit to the team who finished in fourth place, mid-table, in the league, and said a number of the players had also played for the A Team, Reserves and importantly the First Team, which showed that the club had a good basis of youth players coming through for the future.

Paul expressed his thanks to Mike Hawes for his support in running the team and felt that special thanks should go to Colin Waller for his dedication and commitment to the youth set-up at the Club. Under 18 award winners were:

Paul Pocock was then presented with an award in recognition of his ten years as a Youth Team Manager.

Reserves Manager, Paul Pocock, explained that he had taken over the team at the beginning of the season and had to undertake a certain amount of rebuilding to ensure they could compete in the Macron Devon & Exeter League Division 1.

The beginning of the season had been difficult having only won one game before the end of November, but the team rallied and were currently in seventh place in the League but this could be affected by the team below them still having two games to play.

Paul thanked the Club for their support and gave special thanks to his assistant, Sean Buttle, Josh Pearson and captain Mark Owen for their help in running the team during the season. The Reserves award winners were:

First Team Manager, Clive Jones, explained that he had gone through a period of wondering whether he should continue as Wellington Manager and that during the season he had been approached by other clubs to manage their teams. However, in February he decided to continue with the Wellington role and his appointment had been confirmed for next season.

Clive said that he would be looking for greater commitment from the team next season which he felt had been lacking during some of the games this season. He had hoped that the team would finish higher up the table than the final 16th place and his aim was to improve on this next season.

Clive extended his thanks to the supporters who travelled to watch the team each week, to Mike Hall and Ben Welch for their help on match days and to the rest of the Committee for their support. First Team award winners were:

Before the presentation of the final award of the evening to the Club Person of the Year, Club Captain Sam Bryant expressed the thanks of the first team to Clive Jones, Ben Welch and Mike Hall and also to Gill Hall, Jenny Oxby and Jane Brown for their match day catering. Mike Hall also thanked Gill, Jenny, Jane, Ann Aspin and Daniel Aspin for the work they undertook to support the Club – and also thanked Ken Bird for improving the Club’s website and social media coverage.

Finally, Mike announced that the Club Person of the Year for 2018-19, voted for by the Committee, was Jeff Brown who had taken over as Club Secretary at the beginning of the season after the resignation of David Derrick.

In thanking Mike and the Club, Jeff expressed his own thanks to wife, Jane, who had supported and helped him throughout the season but explained that he had only taken the role on a short-term basis and that the Club should be looking for younger blood to get involved to build for the future.

Wonderful day to remember our Neil