You are here: Home1 / Defeat for first team in South Devon

A goal in each half consigned Wellington to their second Premier Division defeat of the season in South Devon. 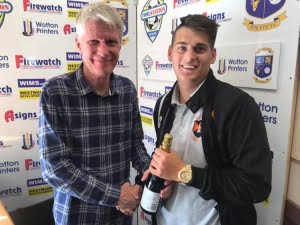 Meanwhile, the Buckland line-up included striker Conor Bryant, who joined the club from Wellington in the close season and was lining up against his brothers Sam and Jack.

The home side set the pattern for the match as they put Wellington on the back foot early on with Lloyd Gardner volleying over at the far post and Nick Rudge shooting wide.

But they failed to seriously trouble Wellington until nearly half-time with Carl Jones and Pengelly both producing fine clearances to help keep the scoreline blank before the contest turned in stoppage time.

Keeper Josh Mclean produced the first of a series of outstanding saves after Nathan Cooper was left unmarked and seemed certain to score with a header.

However, from the resulting corner, the ball eventually came back to Groves, who drove it through a crowd of players and into the net to give Buckland the lead at the break.

Tom Hawkings came on as a half-time sub for Sam Jones but it was a similar story in the second half with Buckland continuing to press forward.

Man-of-the-match Mclean kept his side in the game with a string of excellent saves, particularly when Cooper raced clear, but he could do nothing to stop Buckland’s second goal with 14 minutes remaining, sub Ryan Bush diving to head home a cross from the right.

That put the issue beyond doubt and Buckland comfortably saw out the game for their first win of the season.

First team bow out of the FA Cup