First team bow out of the FA Cup

You are here: Home1 / First team bow out of the FA Cup

Wellington bowed out of the Emirates FA Cup with a heavy replay defeat in Bristol after the home side struck three times in four minutes just before half-time. 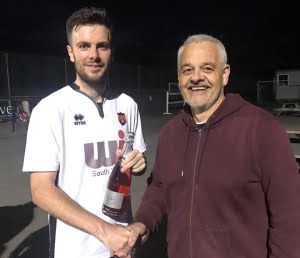 But the game got off to the same start as the wind-ravaged initial meeting – also played at Cribbs after Wellington sacrificed home advantage – with his team falling behind in the opening minutes.

The tie was only four minutes old when a cross from the right found Charlie Aldom unmarked and his shot went into the net with the help of a deflection.

The two sides huffed and puffed for the next half-hour without either creating a clearcut opening and no-one could have predicted that the scoreline would change so dramatically before the break.

Cribbs extended their lead after 39 minutes as a cross from the left was headed on to central defender Jake Hodgson, who took a touch before firing home low past Mclean.

Two minutes later, it was 3-0 and this time it was a cross from the right finding Joe White completely unmarked to head home.

If that wasn’t bad enough, Cribbs made it four almost immediately with another cross from the right coming back off the woodwork to George Kellow, who volleyed it in off the underside of the bar.

But things went from bad to worse two minutes after the restart with a fifth goal for Cribbs. Aldom burst in from the right and slipped the ball through to Kellow who produced a clinical finish past Mclean for his second on the game.

With such a huge margin between the two sides, the second half was something of a non-event although, to their credit, Wellington kept going and created a couple of chances in the latter stages.

They were finally rewarded with a late consolation goal with six minutes remaining. Borges made a fine run down the centre, which ended when he was brought down, and Ian Bellinger smacked home the resulting free-kick off the inside of the right-hand post.

Defeat for first team in South Devon
Scroll to top