You are here: Home1 / FA Cup tie ends all square

The two sides must play again on Tuesday (August 13th) after the only winner in their first meeting proved to be the fierce wind which made good football virtually impossible.

As we sacrificed home advantage for the tie because of cricket on the Playing Field, the replay will also take place at Cribbs with a 7.45pm kickoff. 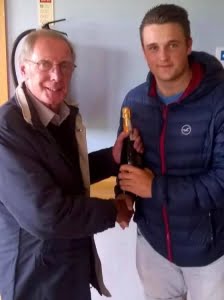 Manager Clive Jones was without three players from the midweek defeat at Keynsham with midfielder Glen Wright and striker Joe Wilkinson both unavailable while keeper Josh Mclean was injured. Defender Tim Legg was also still absent on holiday.

That meant Mitch Woodgate took over in goal with the fit-again Joe Chamberlain coming into defence and Connor Pengelly playing up front.

Wellington had the wind at their backs in the first half but it was Cribbs who took the lead after only six minutes as Joe White played the ball inside to skipper Jake Hodgson, who coolly slotted it under Woodgate and into the net.

Wellington almost drew level three minutes later when Pengelly found youngster Joe Wylie, who turned his marker and was left with only keeper Archie Watts to beat but dragged his shot wide.

But they were not to be denied and drew level after 12 minutes. Ian Bellinger, who has re-joined the club from Bridgwater Town, played a great ball over the top to Pengelly, who produced a sublime lob over Watts.

With the conditions in their favour, Wellington took the game to Cribbs and almost went into the interval in front as Pengelly headed just wide from a cross by Bellinger, who also saw a long-range shot dip just wide.

Jones, who had replaced Chamberlain with Josh Pearson after 37 minutes, rang the changes for the second half – with Wellington playing into the wind – including Pengelly dropping back into defence and Ollie Nott going up front.

The move paid dividends as Cribbs, who had drawn 1-1 with Bridgwater Town in midweek, rarely troubled the well-organsed back line. Jones also introduced the fresh legs of subs Paolo Borges and Mark Owen to replace Nott and Sam Jones respectively.

Cribbs did get the ball into the net with the assistant’s flag raised for offside while sub Charlie Aldom headed narrowly off target in the dying minutes but the draw was a fair result.

PHOTO: Pengelly was named man-of-the-match and the award was presented by Norman Rogers.

First team bow out of the FA Cup
Scroll to top