You are here: Home1 / New season under way for first team

After being without a game on the opening day of the season, Wellington’s premier campaign got off to a belated start with a trip to Keynsham Town, runaway winners of division one last season.

Manager Clive Jones included all three recent signings in his starting 11 – Carl Jones at the back, Ian Bellinger in midfield and Joe Wilkinson up front – but was without key defender Tim Legg (on holiday) while a hamstring injury meant the skilful Joe Chamberlain was a non-playing sub. 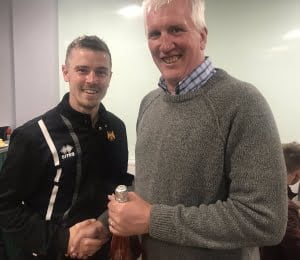 With a healthy home crowd to welcome their side back into the league’s top flight, Keynsham had the first effort on goal after eight minutes as a low shot from skipper Harley Purnell fizzed past keeper Josh Mclean’s post.

They came even closer 11 minutes later when Matt Long broke clear and flicked the ball past Mclean but Wellington were able to clear the danger.

On their 3G pitch, Keynsham always held the edge in the first half but Wellington almost went ahead after 24 minutes.

Wilkinson, signed from Staplegrove, played in young Joe Wylie, who elected to square the ball rather than shoot and, when it came out to Glen Wright, the hard-working midfielder crashed it over the bar from a decent position.

The rest of the half was one-way traffic with Keynsham growing stronger as the interval approached without being able to breach a stubborn Wellington defence, well marshalled by skipper and man-of-the-match Sam Bryant.

The visitors suffered a blow when injury forced Bryant’s brother Jack out of the action for the second half and he was replaced by Josh Pearson.

Keynsham started the second half as they finished the first but the game turned on a controversial moment just before the hour mark.

Jones, who had impressed in defence, looked to have played the ball first when brought down Matt Curnock, who was racing towards goal, but the referee thought otherwise and produced a red card to reduce the visitors to ten men.

Within four minutes, Keynsham made their man advantage count as a fine run down the left by their star man Ben Harris ended with his teasing cross being headed home by Matt Long.

Wellington boss Jones introduced both Connor Pengelly and Ollie Nott in an effort to freshen things up but by now it was all Keynsham and they increased their lead with 11 minutes remaining.

A corner was headed out to Harris who capped a fine display by giving Mclean no chance with a stunning half-volley from distance.

The home side could have made it 3-0 when they were awarded a penalty in the closing minutes – after a cross hit Pearson on the arm – but Mclean produced a brilliant save to keep out Matt Brown’s spot kick.