You are here: Home1 / Heavy defeat by fellow strugglers

This was the clash between the two sides without a premier division point this season but it was the home side who opened their account with the visitors travelling back down the M5 with their tails between their legs.

Manager Clive Jones made two changes from the FA Vase defeat at Shepton Mallet with keeper Tom Welch making a welcome return to the club and Mitch Woodgate moving from between the sticks to play at left-back in a four-man defence. 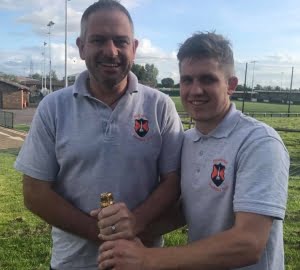 Wellington were on the back foot from the start and fell behind after 16 minutes as home skipper Sam Wentland played in a cross from the left and Ryan Radford outpaced a static Wellington defence to turn the ball past Welch.

The visitors were struggling to get into any rhythm and had a warning of things to come after 26 minutes when Kye Simpson wriggled into space but dragged his shot wide.

They failed to take heed and were then blitzed by three goals in three minutes to seal the game before half-time.

After 32 minutes, Radford skipped past a string of half-challenges to make it 2-0, then Box got behind the defence to lob Welch for the third and, finally, Box raced clear to strike his second of the game.

Wellington’s half was summed up just before the break when Joe Chamberlain’s shot was parried and Glen Wright pounced on the rebound but the ball was scrambled round the post.

The visitors were playing for their pride in the second half and, although they had a bright patch which could well have reduced the arrears, some woeful defending saw Roman Glass run in four more goals.

Sub George Lloyd gave Welch no chance with a stunning 25-yard drive into the top corner after 59 minutes and, 11 minutes later, another home sub Andrew Gurney had too much room on the right for number six.

Box completed his hat-trick from the penalty spot with four minutes remaining after Gurney had been brought down and a flowing move in the dying minutes ended with Lloyd completing the rout.

PHOTO: Chamberlain was named man of the match and received the award from committee member Chris Brooks.

Reserves bow out of Senior Cup
Scroll to top