Wellington didn’t so much overturn the form book as rip it up and throw it out of the window as they recorded a stunning win away to in-form Brislington.

The home side went into the game as joint leaders of the division and on the back of an excellent midweek victory while Wellington were not only pointless but had suffered a humiliating 8-0 hammering in their previous game. 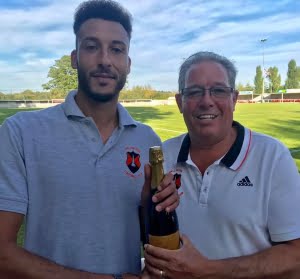 With manager Clive Jones away on holiday, Reserve team boss Paul Pocock took charge of the side and he was without four players through unavailability or injury as Josh Pearson, Carl Jones, Pocock’s son Lewis and Joe Wylie replaced Tim Legg, Mitch Woodgate, Connor Pengelly and Sam Jones.

But Wellington were at the races from the kick-off and Joe Chamberlain headed over during a lively start before they went ahead with just 11 minutes on the clock.

Ian Bellinger sent over a cross from the left which reached Jack Bryant at the far post and he turned the ball across goal for his brother Conor to smash home his first goal since rejoining the club after a short spell with Buckland Athletic.

Brislington almost drew level three minutes later when their striker was played in but keeper Tom Welch blocked his shot and that proved to be one of the home side’s few serious efforts on goal in the entire game.

Wellington doubled their lead just before the half-time when talented youngster Joe Wylie played in Chamberlain and, although his shot was half-saved, the vicious spin continued to take the ball goalwards and past a covering defender.

Shortly before that, visiting skipper Sam Bryant had limped off with a hamstring strain and he was replaced by debutant Ollie Holman. Pocock reorganised with the sub going up front, Conor Bryant dropping back into midfield and Glen Wright going into defence alongside Carl Jones.

The changes could have knocked them out of their stride but instead the entire XI stepped up to the plate and continued to take the game to their opponents.

Eight minutes into the second half it was 3-0 as the impressive Holman sprang the offside side and coolly looked up to pick out Chamberlain for his second of the match.

Brislington tried their best to get back into the game and Welch produced a flying save to keep out a fierce shot with 20 minutes remaining but the visitors held firm for an outstanding victory to open their points account for the season.

PHOTO: Carl Jones was named man of the match and received the award from vice-chairman Graham Aspin.

Improved display by our ladies
Scroll to top