A much-changed Wellington side bowed out of the Les Phillips Cup in their first game of the season at the Playing Field. 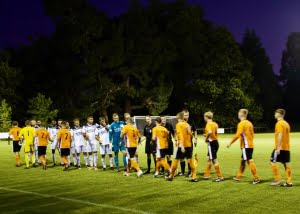 With one eye on Saturday’s local derby against Bridgwater Town in the league, stand-in manager Paul Pocock made a string of changes to the side which had pulled off a shock win away to joint leaders Brislington.

Against the team which had beaten them 8-0 earlier in the month, the starting 11 contained no fewer than three 17-year-olds and yet Wellington could easily have gone in at the break on level terms after a blood-and-thunder first half of cup football.

Indeed, they came closest to taking the lead when a free kick from Josh Wadham – making a temporary return after his move to Bideford – smacked against the foot of the post.

Just as it looked like the half would end goalless, Roman Glass broke the deadlock with a strike of sheer quality as Troy Simpson cleverly cut in on goal from the right and sent an unstoppable shot past keeper Tom Welch.

That got the visitors’ tails up and they started the second half at a gallop with Welch keeping Wellington in the game early on with a superb double save.

The home side made the occasional surge into the Roman Glass half and one of them led to Ian Bellinger drilling a shot wide before they fell further behind after 63 minutes.

Again, it was that man Simpson who created just enough room to again give Welch no chance as he shot across the keeper and into the net.

Seven minutes later, Simpson was denied a hat-trick when Wellington scrambled the ball clear after he had rounded Welch but Roman Glass made it 3-0 after 77 minutes as a slick passing move was clinically finished by George Box.

Improved display by our ladies

Defeat in first league game at home
Scroll to top