You are here: Home1 / Defeat in first league game at home

Wellington failed to build on their first win of the season as they went down to in-form Bridgwater Town in their opening league match at the Playing Field.

Manager Clive Jones was back in charge after being on holiday but he was without the experience of Tim Legg, Carl Jones and Tom Welch while injury also robbed him of striker Conor Bryant, who had been named in the starting 11 but was unable to take the field.

Despite this, Wellington stopped the visitors from getting into their stride in the opening exchanges although keeper Mitch Woodgate had to be at his after ten minutes when Steve Murray was sent racing clear. 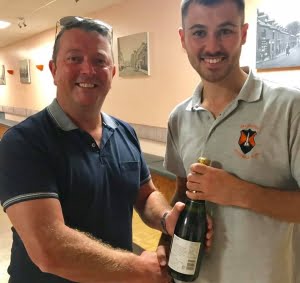 At the other end, Jack Bryant forced a full-stretch save from Woodgate’s opposite number Jake Viney, one of a number of players on both sides playing against their former club.

In sweltering conditions, the referee called proceedings to a halt for a drinks break on the half-hour and Bridgwater took the lead almost immediately after the re-start.

Murray twisted and turned before sending in a shot, which was half-blocked, and his strike partner Jack Taylor – the league’s joint top scorer last season – showed his quality by reacting first to give Wellington fans an unwanted reminder of his days in tangerine.

That rather took the wind out of Wellington’s sails and, although they kept the score at 1-0 until the break, the rest of the game was a one-sided affair.

Taylor doubled Bridgwater’s lead after 58 minutes, heading into an empty net after Murray had lobbed the ball over Woodgate.

And the visitors made the game safe with ten minutes remaining when Josh Pearson brought down sub Jake Brown and another Jake, Llewellyn, coolly slotted home the resulting penalty.

Wellington saved their best move until the dying minutes – and it involved two of their talented youngsters – Joe Wylie burst from midfield and fed Joe Chamberlain, whose cross was headed fractionally over the bar by Ollie Holman.

PHOTO: Mitch Woodgate was named man-of-the-match and received the award from Joe Conway, whose company Conway Cladding are helping to sponsor the first team with their name of the back of their shirts.

A team smash record to go top
Scroll to top