You are here: Home1 / First team beaten in Wiltshire

Wellington suffered their third successive defeat as they were beaten in Wiltshire to remain bottom of the table.

Manager Clive Jones was again without a string of key players through injury and unavailability, which is undoubtedly having an effect on his side’s disappointing start to the season. 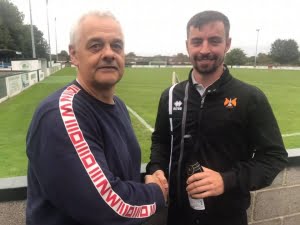 Westbury threatened from the start and went ahead after only eight minutes when the ball was played to Sam Jordan, who cleverly cut inside before shooting low past keeper Tom Welch.

Six minutes later it was 2-0 as Welch failed to deal with a long through ball and Jordan pounced to roll the ball into an empty net.

And Wellington’s nightmare start was complete after 18 minutes as they fell further behind when Jordan broke forward, twisted and turned before shooting home to complete a quickfire hat-trick.

The shellshocked visitors attempted to claw their way back into the game but their cause was definitely not helped four minutes from the break.

Skipper Sam Bryant was harshly judged to have fouled Ricky Hulbert and Jason Henley dispatched the resulting penalty to make it 4-0.

That left Wellington with a mountain to climb in the second half and they were unlucky to not reduce the arrears with both Joe Wylie and Jack Bryant seeing shots come back off the post.

To rub salt into their wounds, they conceded a fifth goal after 69 minutes when Hulbert raced clear to shoot low past Welch.

PHOTO: Jack Bryant was named man-of-the-match and the award was presented by Keith Harcombe.

Cracking cup win for A team