You are here: Home1 / Rampant Reserves hit five past Bow

Devon and Exeter League: Wellington Reserves 5, Bow Athletic 0
Following the disappointment of the previous week’s poor away showing, the Reserves had an opportunity to bounce back with their long-awaited first home game of the season.

In front of an impressive and supportive home crowd, they came out fired up and full of running.

As with the previous week, their efforts were rewarded early when, home debutant Liam Thorne netted from a tight angle. Tom Davies fed the ball into Ollie Nott who in turn played a slide rule pass perfectly for Thorne to run on to. Without breaking his stride, he coolly hit a low right-foot shot across and past the keeper just inside the far post. 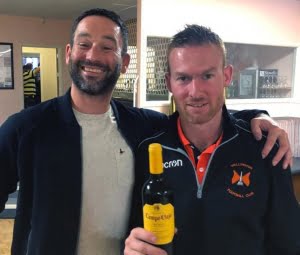 The away side rallied, but were restricted to long-range shots, corners and crosses which rarely troubled Rob Hall between the sticks.
By comparison, Wellington looked dangerous when attacking with their wide players particularly well used and often finding space.
Wellington’s second came on 19 minutes when a clearcut handball led to a penalty award. Thorne’s spot kick was saved, but clinically followed up by the evergreen Darren Mace, smashing a hip-high half-volley high into the net.
Wellington continued to press and, deservedly, two became three on 33 minutes. After moving the ball wide left, Mace turned the full-back inside out and got to the byline. He delivered an almost undefendable cross for the onrushing Aaron Hawkings to smash home from close range. Half-time arrived with Wellington deservedly 3-0 to the good.
Playing up the slope for second half, the home side continued where they left off as a good tempo and pressing kept their visitors caged and frustrated.
The fourth came on 56 minutes. A quick break saw the tireless Ash Saunders clear on the right. He fed an inch-perfect crossfield pass to strike partner Thorne who cleverly took the ball inside the last defender with his first touch before curling a precise right-foot finish beyond the reach of the travelling keeper.
With the game in the bag, Wellington introduced 17-year-old Robbie Broomhead into midfield for Dave Darch. Luke Woodgate replaced the tiring Thorne and the impressive Wes Poulsom came on for his wounded cousin Dan Woodgate. The flow of the game continued to favour the home side with Fleet, Davies and Owen stifling any attacks which came their way.
The fifth goal was yet another decent team effort. A couple passes released skipper Owen down the right. He drew the full-back out before feeding the speedy overlap of Wes Poulsom. On gathering the ball, the youngster looked up and delivered a delightful low cross into the path of Saunders who deservedly finished from close range to complete the scoring.
Overall this was a marked improvement on the previous week’s display. The unity and desire to work hard on and off the ball was the most satisfying aspect while better communication and pass selection were also evident.
PHOTO: Darren Mace was named mn-of-the-match and received the award from support and former player Dave Poulsom.