You are here: Home1 / Home defeat before bumper crowd

Wellington failed to build on their surprise midweek success over Tavistock as they were beaten by much-fancied Exmouth Town before a bumper crowd at the Playing Field.

The game was moved back a day to be the last in the league’s seven ‘Groundhopper Weekend’ matches and, as a result, attracted an attendance of 315 from all over the UK and even overseas. 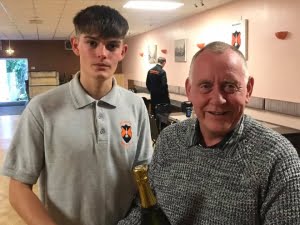 Manager Clive Jones was forced into defensive changes as he was without both new signing Mike Harrison and central defender Tom Hawkings against the former champions, who have returned to the league this season.

The visitors almost went ahead after two minutes when Jordan Harris charged down a clearance from keeper Tom Welch but the ball rolled just wide while, at the other end, Jack Bryant brought a spectacular save out of Chris Wright with a long-range volley.

It was nip and tuck in the opening exchanges before Exmouth broke the deadlock on 32 minutes as the ball was played over the top of the home defence for Harris to cut inside Glen Wright before shooting home.

Mark Lever had a header cleared off the line before the visitors extended their lead with three minutes of the half remaining. Wellington gave the ball away and Aaron Denny was played in to finish neatly past Welch.

That goal rather took the sting out of the game and the first 20 minutes of the second half were pretty uneventful after which Welch did well to save a Harris volley and then turned a free-kick from Adam Bilcock on to the bar.

There were a few feisty challenges flying in and matters boiled over with 15 minutes remaining as wide-man Josh Wadham was sent off for Wellington. He received a yellow card for a challenge and the referee then sin-binned him for dissent but the player’s red mist turned into a red card for his subsequent reaction.

Ironically, the dismissal saw Wellington play some of their best football and they almost pulled a goal back when they were awarded a free kick eight yards out after the visiting keeper picked up a back-pass. Skipper Sam Bryant’s shot was blocked and so was sub Connor Pengelly’s effort from the rebound.

Shortly afterwards, striker Conor Bryant brought a good save out of Wright but Exmouth saw the game out for the points.

PHOTO: Joe Wylie was named man-of-the-match by match sponsor Jeremy Smith of Bray Accountants, who is pictured presenting the award.

Reserves bow out of cup

U18s give an improved display
Scroll to top