Heavy reverse in the premier cup

You are here: Home1 / Heavy reverse in the premier cup

Wellington bowed out of the premier cup as they were well beaten by in-form Wells City at the Playing Field. 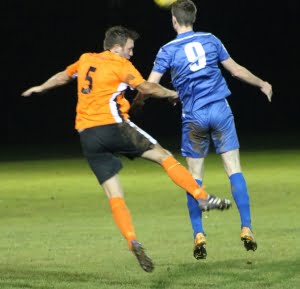 But Wellington were again without a clutch of first team regulars and their inexperience was exposed by opponents sitting third in the Toolstation division below them.

The hosts started well enough but soon found themselves on the back foot and fell behind midway through the first half.

They had appeals for a penalty turned down as Dawson went down in the box and, straight away, Wells broke upfield with former Wellington winger Craig Herrod playing in Alex Camm to net.

It remained 1-0 at the break but then it all went wrong early in the second half with Wells scoring three goals in seven disastrous minutes.

Herrod sent in a low cross which wasn’t cleared properly for Dale Hunt to net, then Herrod’s quick free-kick caught out the home defence and keeper Tom Welch saved from Charlie Crook but Camm drove home the rebound.

Wells made it 4-0 shortly afterwards with a fine individual goal by Hunt, who burst in from the left to shoot low past Welch.

Wellington pulled a goal back after 62 minutes when Dawson capped a promising debut with an exquisite finish from a low cross by Joe Chamberlain.

But Wells restored their advantage three minutes later, striker Harvey Hadrill rising to head home, and it should have been six with eight minutes remaining, Crook blasting over with the goal at his mercy.

U18s give an improved display

A team through to cup semis
Scroll to top