Midweek defeat for firsts in Bristol

You are here: Home1 / Midweek defeat for firsts in Bristol

Wellington’s new-look side failed to build on an impressive first-half display in Bristol as two late goals produced a scoreline which did not reflect the game.

Manager Tim Legg has continued to rebuild following the loss of a dozen first-team squad members who have moved on after the departure of previous boss Clive Jones last month. 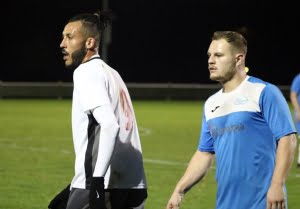 He has worked wonders in only a few weeks and his batch of new signings are showing great promise but now need to find a cutting edge to pick up the points required to move up the table.

But there was a welcome return for Josh Mclean between the posts, a debut for ex-Bridgwater Town central defender Jake Horsey and skipper Glen Wright was back after missing the defeat at Shepton.

Wellington started brightly and almost went ahead inside the first minute when  Carl Jones – moved up front from defence –  diverted a shot wide of the Cribbs goal.

The home side responded almost immediately to take the lead from their first attack as the ball came out to striker Josh  Vincent on the edge of the box and he had time to pick his spot before drilling low past the diving Mclean.

An entertaining half saw Wellington play their best football since Legg took over and the visitors were the better side for long spells without being able to force an equaliser.

At the other end, any further advances from a lively Cribbs side were repelled by the back four of recent arrivals Horsey, Tom Stone and Neil Last alongside the dependable Josh Pearson.

Unfortunately, Wellington were unable to reproduce much of their free-flowing passing game in the second half although the match hinged on what proved to be a pivotal incident in the 65th minute.

A mistake by Cribbs left sub Joe Wilkinson with only the keeper to beat and, when the ball reached Jones, his shot was acrobatically headed off the line by a home defender.

That was the closest the visitors came to getting back on terms and Cribbs sealed the points with goals from two subs in the final 13 minutes.

First, a low shot from the impressive George Kellow was deflected past Mclean and just inside the post, then Stone appeared to be knocked off the ball before Ed Harrison drove home the third.

A team stay top despite defeat

A team hit seven to stretch lead
Scroll to top