You are here: Home1 / First team sunk by late strikes

It was a case of déjà vu for Wellington as they went down to defeat at home to sixth-placed Clevedon Town. 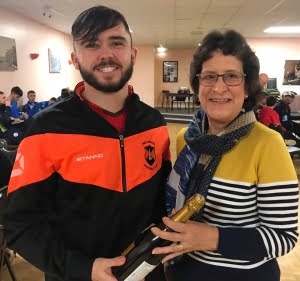 In a reflection of their midweek reverse at Cribbs, they played some attractive football and were well in the game only to be sunk by two late goals.
Wellington were without central defender Jake Horsey while left-back Neil Last was forced out of the action by a groin injury picked up in the warm-up.
But they started brightly and had the better of the opening exchanges without being able to break the deadlock.
They came closest to taking the lead on the half-hour when George Sinnott’s long throw reached skipper Glen Wright and, although he rose above the keeper, his header was cleared off the line by a Clevedon defender.
At the other end, keeper Tom Welch was on fine form and pulled off a brilliant reaction save to keep out Syd Camper’s overhead hook-shot.
But, despite a valiant effort, he could not stop Clevedon taking the lead after 37 minutes as a low cross reached Zach Drew who scored at the second attempt.
The second half was a cat and mouse affair with neither side creating a clearcut chance as Wellington pressed for an equaliser.
But, just at Cribbs, they were undone in the closing stages when Jay Murray was sent racing clear to double Clevedon’s advantage with ten minutes left and then substitute Lucas Vowles produced a sublime finish to seal the points.
There was still time for Wellington to score a consolation goal, central defender Tom Stone rising to head home a corner, but they were again left to reflect on what might have been.
Wellington: Tom Welch, Josh Pearson, Carl Jones, Tom Stone, Jordon Mace, Luke Boyle, Joe Wylie, Glen Wright, George Sinnott, Charlie Dodd, Ollie Holman. Substitutes: Aaron Hawkings, Ollie Nott (used), Tim Legg and Joe Wilkinson (not used). Attendance: 65.
PHOTO: George Sinnott was named man of the match v Clevedon today and the award was presented by Assistant Secretary, Jane Brown.

Title hopefuls strike in each half
Scroll to top