Title hopefuls strike in each half

You are here: Home / Title hopefuls strike in each half

Wellington were unable to stop Plymouth Parkway’s charge to the top of the league as a goal in each half saw them take all three points back to Devon. 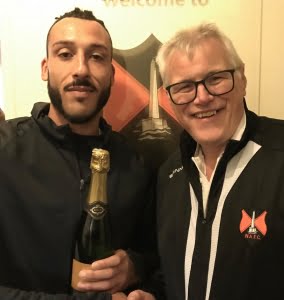 Parkway are intent on gaining promotion to the Southern League, having been pipped by Willand Rovers last season, and have invested heavily to make the leap.

For their part, Wellington are still undergoing a rebuilding process following the departure of manager Clive Jones and, subsequently, 12 of his first-team squad.

To make matters more difficult, new boss Tim Legg was without four of his starting 11 from the previous game and so included himself in the line-up, having recovered from injury, along with Harry Hamblin, a new signing from Bridgwater Town.

Wellington created an early chance on 12 minutes with Joe Wilkinson breaking clear on the right and putting in a dangerous cross which just went behind the onrushing Hamblin.

Not surprisingly, Legg’s inexperienced team were under the cosh for most of the game but they held Parkway at bay for the first 36 minutes until their stubborn defence was finally breached.

A low cross caused problems for Wellington and Luke Mortimer was left to prod the ball home from close range.

Keeper Tom Welch was again on top form in the home goal but could not prevent Parkway doubling their advantage five minutes after the break.

Striker Adam Carter showed why he is the league’s leading scorer by getting in behind the defence and producing a clinical finish from a tight angle.

To their credit, Wellington refused to lie down and, just after the hour mark, skipper Glen Wright sent in a fierce shot which was parried by the keeper with George Sinnott just unable to reach the rebound first.

Welch produced a number of fine saves to keep the score at 2-0 but the visitors ran out worthy winners and will undoubtedly be title challengers this season.

PHOTO: Central defender Carl Jones was named as our man-of-the-match by Chairman, Mike Hall, who presented the award.

Brave display by U18s at seaside
Scroll to top