First half goals lead to defeat

You are here: Home1 / First half goals lead to defeat

Re-built Wellington gave another spirited display but were unable to halt their run of defeats at Bitton. 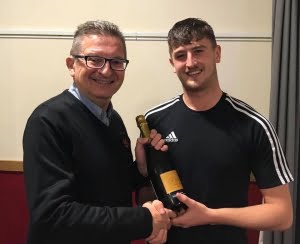 The hosts, who started the game in ninth place, are among the most highly-rated sides in the division and were good value for their victory.
It was the last in a run of difficult fixtures since new boss Tim Legg took over and Wellington now have time to re-group as they are without a game next Saturday.
Legg made a number of changes to the side from the midweek defeat by table-topping Plymouth Parkway with the return of defenders Tom Stone and Neil Last plus a call-up in midfield for Ollie Nott.
It was a cagey opening to the game but the first effort on goal saw Bitton take the lead as defender Alex Grimshaw rose unchallenged to head home a corner.
Although the visitors were under the cosh for most of the first half, they almost drew level in similar circumstances after 41 minutes.
Stone rose to meet a corner from George Sinnott but his thumping header was acrobatically tipped over by keeper Sam Burgess to sum up Wellington’s luck in front of goal since Legg took over.
To make matters worse, Bitton scored what proved to be a second killer goal on the stroke of half time when the dangerous Aysa Corrick cut in from the right and sent a low shot past keeper Tom Welch.
After the break, it was a similar story with the home side always on top but they failed to add to their tally thanks to some poor finishing and another excellent display by the in-form Welch.
At the other end, Charlie Dodd and substitute Luke Boyle both had chances to reduce the deficit but were denied by Burgess.
Wellington: Tom Welch, Neil Last, Tom Stone, Jake Horsey, Josh Pearson, Charlie Dodd, Harry Hamblin, Ollie Nott, Glen Wright, George Sinnott, Carl Jones. Substitutes: Luke Boyle and Josh Champion (used), Jack Bown-Porter (not used). Attendance: 57.

PHOTO: Midfielder Harry Hamblin was named man-of-the-match and the award was presented by Ken Bird, the club’s Website and Social Media Officer.

Brave display by U18s at seaside

A team stretch lead at top
Scroll to top