Blog - Latest News
You are here: Home1 / Table toppers are too hot to handle

Our U18s travelled to Chard Town who are currently top of the league, and there were two changes with the return of Wes Poulsom and Alfie Robins.

The pitch was in good condition although it was a cold night as Chard kicked off playing down the slope. 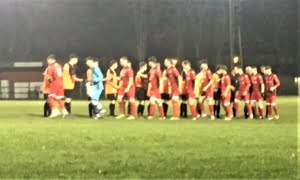 Wellington started well with Lewis Pocock causing a few problems but Chard gradually began to have the better of the game and went into the lead midway through the first half. They scored a two more before finishing the half with a great shot from 30 yards to go into the break 4-0 ahead.

The second half saw Chard dominate but they only added two more goals playing down the famous slope.

Poulsom had Wellington’s best chance in the second half when put through after a good move as the Chard keeper made a fine save.

It was a tough night for the Wellington team who will now hope that two home games will see their results improve. They have yet to play a home game after four cancellations but are now due to entertain Bishops Lydeard on December 10th and Wells City on December 17th.

Before kick-off, eight players were presented with their Wellington beanies, sponsored by Des Badcock, after completing three matches this season.

Heavy defeat at the Playing Field
Scroll to top