Heavy defeat at the Playing Field

You are here: Home1 / Heavy defeat at the Playing Field

Wellington are still looking for their first win under new boss Tim Legg after a bad day at the office against Shepton Mallet. 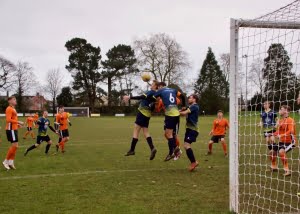 Legg was left with massive job when 12 members of the first team squad followed previous manager Clive Jones out of the club and he has worked hard to bring in new players – with three more taking the pitch against Shepton.

But, following their poor start to the season, they now need to start picking up points to pull themselves away from the drop zone.

It all looked so promising as they attacked from the kick-off and almost took the lead in the opening minutes. A fine diagonal pass by Ollie Holman found George Sinnott in space on the left and he advanced on goal before his low shot was saved by keeper Jonny Hill.

Unfortunately, that proved a false dawn for Wellington as Shepton gradually took control of the game to run out worthy winners.

Shortly after defender Josh Pearson had limped off on the half-hour, the visitors took the lead from a textbook header by Daryl Charman and they doubled their lead five minutes before the break when a free-kick into the box ended up in the net with Charman claiming the final touch.

Legg introduced experienced winger Ian Bellinger for the second half in an effort to take the game to Shepton but his side were pegged back continually and conceded three more goals.

Jack Fillingham turned home a low cross to make it 3-0 after 55 minutes and scored again ten minutes later as a through ball sliced open the Wellington defence and left him on his own to run on and net.

The striker should have had completed his hat-trick in the 70th minute when a bad back-pass left him one-on-one with Tom Welch but the keeper blocked his effort.

Shepton had already beaten Wellington twice this season – in the FA Vase and the league – and they were not to be denied a fifth goal. With 14 minutes remaining another low cross was converted, this time by sub Joe Morgan.

It was the worst display by Wellington since Legg took charge but at least they have a run of home games as they bid to end their losing run.

Table toppers are too hot to handle