You are here: Home1 / Reserves’ winning run is ended

After another prolonged period of postponements, the Reserves returned to league action at the Playing Field.

Full of optimism pre kick off following a decent run of results, the Reserves felt they could continue their winning ways. This unfortunately proved to be wishful thinking.

Exwick came out of the blocks with more zest, movement and commitment and were soon ahead. Their wrecking ball of a striker simply bullied and bulldozed his way through some timid and nervous defending. The ball was partly cleared but eventually fired past a helpless Rob Hall.

As the first half evolved, Wellington were being out-fought and individually were not reacting. They could have gone further behind except for the keeping of Hall and a string of missed chances.

Wellington did get back on level terms though. After a set-piece clearance, the ball was played through to Josh Champion (pictured below) on the left of the box. He turned quickly and fired a low near-post shot past the away keeper. 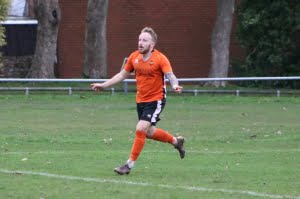 But this was as good as it would get for the home side as, within five minutes, Exwick were ahead again.

As half-time arrived, the changing room was welcome sanctuary for a disappointing Reserves performance.

The second half saw a marginal improvement in the team performance, but it was way below where it needed to be although there were some better individual displays.

Youngsters Wes Poulsom and Robbie Broomhead, who appeared from the bench soon after the break, added some zest. Champion always looked a threat and 16-year-old Danny Nicholls continued his impressive form.

But, all in all, Exwick were the better team, more creative, quicker to the ball and generally sharper and they deserved to score two more second half goals to run out 4-1 winners.

This was a very disappointing performance and there will need to be a huge response for the next game, a trip to high-flying Crediton.

Fightback in vain for A team